Have you been accused of the Production of Child Pornography? This is a serious offence which can lead to a prison sentence if not handled properly. These investigations normally begin with the Police knocking on your door with a search warrant wanting to look at your computer and other devices.

Production of Child Pornography is a serious charge which can be made out in simple ways such as by printing a pornographic image or by copying it from one disk to another.

Please call us before the interview if the Police want to speak with you about an allegation that you produced child pornography.

Our lawyers can also attend the Police station with you and sit in on a Police interview to make sure that you are assisted and supported.

Defences to this charge generally relate to who had access to the computer and whether the Prosecution can prove beyond reasonable doubt that you were the person who produced the material. There are also often issues around peer sharing and streaming of images.

This behaviour generally does not refer to the creation of films themselves. It is often the duplication of them on home computers and so the Courts often deal with them in a similar way to Possession of Child Pornography charges.

We can also help you in a plea of guilty to Production of Child Abuse Material.

Most people charged with offences such as this have never been before a Court previously and are employed and lead otherwise good lives. It is important, if pleading guilty, to provide the Court a report from a forensic psychologist that we know will give us a good detailed report.

There are always interesting details about people’s lives which help a Magistrate or Judge to impose a better punishment. We are experienced with these sorts of matters and know what works in Court. We work closely with our clients in developing a plan for the plea hearing. The more time you give yourself to prepare your plea, the better. It will undoubtedly be the most important Court appearance of your life and you do not want to leave things to chance. 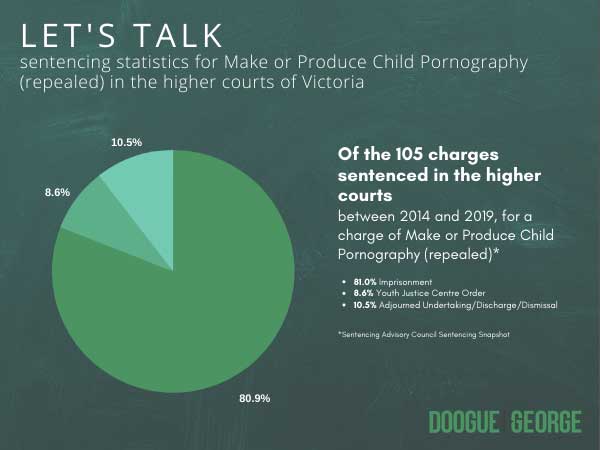 You may visit this page to view sentencing decisions by Victorian County Courts for Child Pornography and Grooming offences. 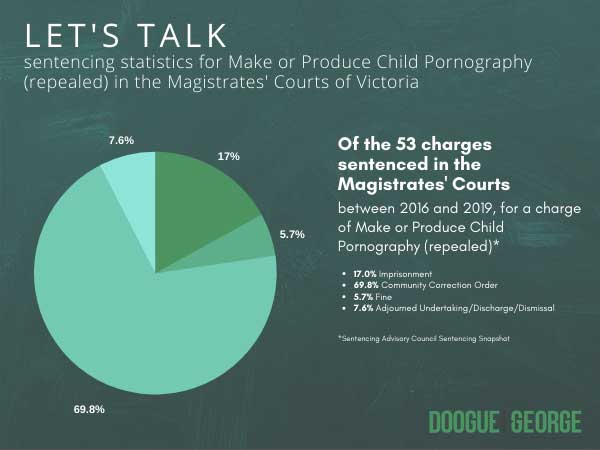 In a case of Production of Child Pornography, the following defences may be applicable to the charge:

What penalties can be imposed for a charge of Production of Child Pornography?

The legislation for this offence can be found on section 51C of Crimes Act 1958:

< Back to Child Offences