In Victoria, section 49G of the Crimes Act 1958 is the offence of Sexual Penetration of a Child between 16 or 17 Years of Age, which is the act of introducing an object, penis or finger into a child’s mouth, vagina or anus.

Has someone called you and accused you of Sexual Penetration of a 16 or 17 Year Old Child? The general age of consent to sex is 16 years old but there are some circumstances in which that is not the case.

Call us today to have your important legal questions answered in confidence.

The Police investigation stage is often the most important point of a case. Anything you tell the Police can harm your defence in the future. The aim of the Police interview is to try to get admissions from you to lock you into a plea of guilty. The Police interview is not where you explain your side of the story and hope that the matter will go away. You need to receive advice on how to deal with the Police.

Pleading not guilty to a Sexual Penetration charge

If you are accused of Sexual Penetration of a 16 or 17 Year Old Child, you should call us to discuss a strategy with one of our experienced lawyers. We are criminal defence lawyers who specialise in sex matters and are experienced in running sex matters in Court and before juries.

We will work hard on your case and make sure that you have the best possible chance of winning your case. There is much work that needs to be done. From pushing the Police to get full disclosure of their evidence to using our own investigators and getting our own witnesses. This case is important to you and that is how we will treat it. We pride ourselves on our preparation of matters for Court.

Sexual Penetration of a 16 or 17 Year Old Child is made worse if the Police say that you were in a position of power over the complainant, such as that you were a school teacher or guardian.

Pleading guilty to Sexual Penetration of a Child

If you are pleading guilty, we can advise you on how to prepare your plea to get the best possible outcome. A good plea will rely on the following:

We have achieved great outcomes for people who have pleaded guilty to Sexual Penetration of a 16 or 17 Year Old Child.

A finding of guilt for Sexual Penetration of a 16 or 17 Year Old Child will almost always lead to an immediate prison sentence and being placed on the Sex Offender Register for a long period of time. 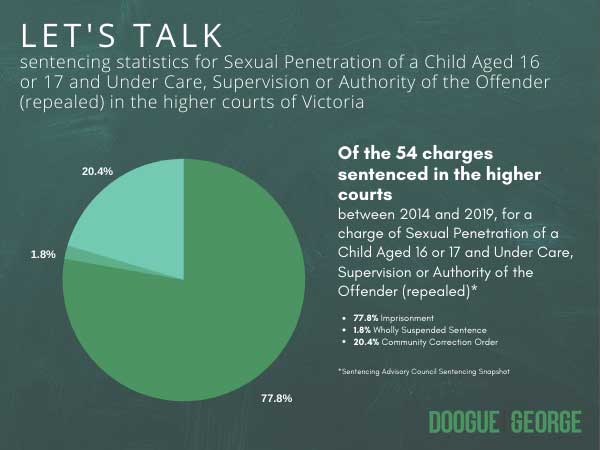 Two obvious defences arise in this charge. Firstly, that you genuinely believed on reasonable grounds that they were 18 or over. Secondly, that the person was not in your care, supervision, or authority.

Often there is a factual dispute as to when exactly something happened with these sorts of charges.

What penalties can be imposed for a charge of Sexual Penetration of 16 or 17 Year Old Child?

You may also visit this page to view sentencing decisions by Victorian County Courts for sexual offences against children.

The legislation for this offence can be found on section 49G of Crimes Act 1958.

A serious charge such as this must be heard before a Judge in the County Court. If it is defended, then it will be heard by a jury of 12 who will decide whether you are guilty.

In Victoria, penalties for certain sex offences involving children have become more punitive. A plea of guilty to Sexual Penetration of a Child 16 or 17 Years of Age committed on or after 20 March 2017 is a Class 1 offence and will result in an automatic prison sentence.

The length of the term of imprisonment can be reduced by strategically preparing for your plea by obtaining an expert report which provides the sentencing Judge with a detailed description of your mental state and committing to treatment well in advance of your plea.

For historical cases of Sexual Penetration of a Child of 16 or 17 Years of Age where a substantial time has passed since the offending, a properly conducted plea in mitigation may result in the sentencing Judge placing you on a Community Correction Order or imposing a Suspended Sentence. For example, in DPP v Cormack [2017] VCC 858, the accused pleaded guilty to one charge of penetration of a child under 16 years of age. The offending occurred in 1985 when the complainant was 14 years old and the accused was 23 years old. The accused remained offence free. He received a suspended sentence.