The offence of Indecent Assault is the intentional and indecent touching of another without their consent. The law is contained in section 40 of the Crimes Act 1958 in Victoria.

Have you been accused of an Indecent Assault by someone?

This offence only applies to older allegations before 1 July 2015. If it is after that date, it is charged as Sexual Assault.

It is important that you are very careful about discussing this allegation with anyone as they may become a witness for the Prosecution.

Our lawyers can also attend the Police station with you and sit in on a Police interview.

Our lawyers are experienced in representing people charged with Indecent Assault. You want a lawyer who is going to fight for your rights and challenge the Police case. There will be a lot of evidence that needs to be requested from the Police. Just because Police say something happened does not make it so. Therefore, we conduct our own very careful investigations.

Our lawyers will also prepare a defence strategy for you. Preparing your case early is key to a great outcome. You want a lawyer who is going to be proactive with the Police and get as much as information as possible.

We can also guide you if you decide to plead guilty to Indecent Assault. We work closely with our clients and advise them of everything we can do to get the best possible outcome. We also make sure you do not plead guilty to allegations which are unsubstantiated. We have achieved great outcomes in the past because of our work ethic on behalf of our clients. 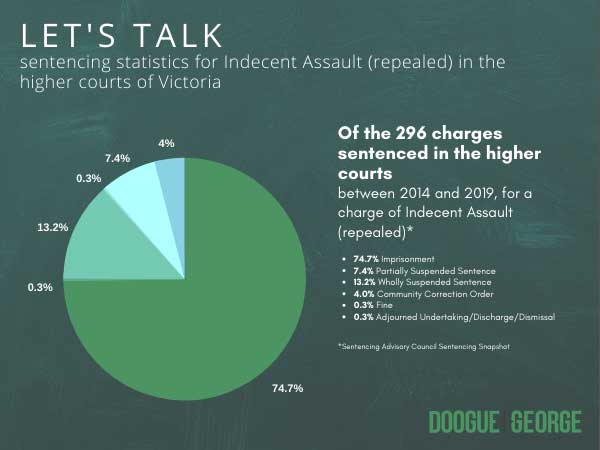 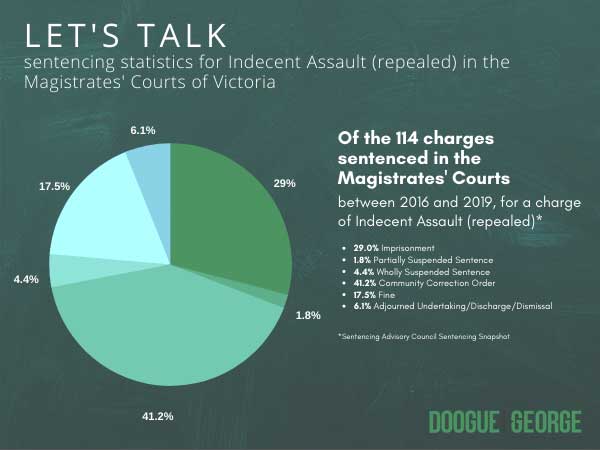 Will the charge be heard in the Magistrates’ Court or the County Court?

The prosecution must prove each of the following five elements beyond a reasonable doubt in order for an accused person to be found guilty:

Section 40 of the Crimes Act 1958 specifically states the following regarding Sexual Assault:

Element 1: The accused assaulted another person

The first element that the prosecution must prove is that the accused assaulted another person.

The actual application of unlawful force, however slight, may be an assault, but inactivity cannot constitute assault. In Fairclough v Whipp (1951) 35 Cr App R 138, the accused was urinating when a 9 year old girl passed by. The accused invited the girl to ‘touch it’ and she did so. It was held that the accused’s invitation to the girl to touch him could not amount to an assault. However, in such a case the accused would presumably be liable to prosecution for committing an indecent act with a child under the age of 16.

In any event, the prosecution must prove that the accused intended to perform the act.5

Consent is the most commonly used justification for indecent touching. Other potential lawful justifications include that the touching was in the course of an ordinary social activity or that the accused was lawfully correcting a child.

It is not necessary that the acts constituting the assault itself be indecent. The prosecution only has to show that the act itself occurred in indecent circumstances.

The test of indecency has been variously stated as whether the behaviour was unbecoming or offensive to common propriety,6 an affront to modesty,7 or an act which right-minded persons would consider to be contrary to community standards of decency.8 The test of indecency has remained broad because ‘indecent acts are as various as the human imagination’.9

In R v Harkin (1989) 38 A Crim R 296, the court found that there needs to be a sexual connotation for an act to be indecent. However even where no objective sexual connotation arises from the act, if the offender’s purpose was sexual gratification, his or her intent may give the act the quality of indecency if the act accompanied by that intent offends community standards.10

In Curtis v The Queen [2011] VSCA 102 the accused had urged two complainants, each aged 14, to kiss. It was common ground that their participation was consensual. On appeal, it was argued that there could be no act of indecency in two teenagers of the same age kissing each other. However the Court disagreed and found that it was open for the jury to decide that the indecency did not arise from the act of kissing but in the instigation of the act by a 24-year old man for his own sexual gratification.

What does consent mean?

Consent is defined in s 36 of the Act to mean ‘free agreement’.

Mistake as to a characteristic of the accused

In R v Linekar [1995] 3 ALL ER 69, the court found that the fact a man who had agreed to pay a specified sum in return for sexual contact leaves without paying does not mean that consent has been vitiated by fraud.

The belief of an accused person that the complainant was consenting to a sexual act does not have to be reasonable.11 The reasonableness of a belief is no more than a guide as to whether it was in fact held12 and is merely a factor to be considered in determining the accused’s state of mind. An accused must be acquitted if the prosecution is unable to disprove that his belief, although unreasonable, was genuinely held.13

An example is Parish v DPP [2007] VSC 494 which concerned the alleged indecent assault of a 15 year old girl. While on the escalator at Box Hill train station, the accused rubbed a 15 year old girl’s lower back and upper buttocks. She said that she was scared and unable to move because of the other people on the escalator but did not say anything to him. On appeal from the Magistrates’ Court, Robson J held that the prosecution bore the onus of establishing beyond a reasonable doubt that the accused was not consenting or might not be consenting and, that as the prosecution had not done so, the charge of Indecent Assault should be dismissed. It should be noted however that in this case, the accused suffered from Asperger’s syndrome and that Robson J noted that ordinarily the prosecution would have had little difficulty in establishing that the accused knew that the complainant was consenting or might not be consenting in such circumstances.

Capacity to give free agreement

In R W S v The Queen [2012] VSCA 249, the accused had engaged in sexual acts with two women. Each of the women had a significant intellectual impairment. One had an IQ of 54 and the other had an IQ of 64. The cut-off point for intellectual disability is 70. On one occasion, the accused had asked one of the women to expose her breasts and he then touched and sucked one of the breasts. A similar incident also occurred on another occasion after which the accused asked one of the women to touch and rub his penis, which she did, and he ejaculated. The accused was convicted but later appealed, inter alia, on the ground that a miscarriage of justice had occurred at the trial where it was said the prosecution case alleged that the women were incapable of consenting but that the jury had not been given directions about what amounted to an absence of capacity to consent.

While this ground was later abandoned, the court did consider it. Referring to Mobilo [1991] 1 VR 399 and Eastwood (1998) 114 A Crim R 448, the court found that a person who understands the sexual nature of the act may nevertheless be incapable of freely agreeing to it, if that person’s diminished intellectual capacity precludes her from making a decision to refuse, or from understanding that she has a right to refuse consent to sexual acts.14 On this basis, the court found that the accused’s ground of appeal, as set out above, had been misconceived.

The maximum penalty is 10 years imprisonment and/or a fine of 1,200 penalty units.15

If you plead guilty to or are found guilty of Indecent Assault, you may be sentenced to a term of imprisonment. Specific deterrence is given weight in these sorts of matters because of the long-term psychological trauma experienced by complainants (DPP v Hendricks [2017] VCC 49). However, depending on the circumstances of your wrong-doing and your personal factors, a Judge may impose a Community Correction Order instead.

Our experienced lawyers prepare for pleas by gathering character references, obtaining a psychological report and outlining relevant factors about your personal circumstances to the Judge to convince them that a penalty other than a term of imprisonment is appropriate.

Exploring your mental health and how it affected your offending is relevant to the sentencing process and can reduce your penalty. The Supreme Court of Victoria in R v Verdins (2007) 16 VR 269 created some guidance in how a mental impairment can be used to reduce moral culpability for the wrong-doing.

The aim of a plea in mitigation to Indecent Assault is to satisfy the Judge that you are no longer a risk of re-offending in this way again. This is done by attending regular counselling sessions, abstaining from drug or alcohol use (if this was the cause for your offending), undertaking a men’s behaviour change program.