Changes in the law relating to rape charges

The Crimes (Rape) Act 1991 (Vic) introduced a number of significant changes to the law in Victoria. Among those changes was to the fact that a woman could not be guilty of the rape of another person.3 Now this is not the case. 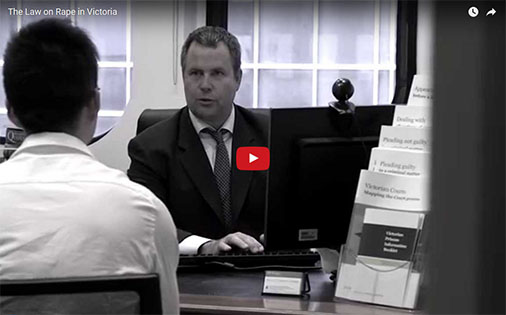 Which Court Will the Case be Heard in?
A charge of rape is always heard in the County Court before a judge and jury.

If you are a child and have been charged with rape, your matter will be dealt with in the Melbourne Children’s Court.
Meaning of Rape

The statutory provisions for a rape offence

This page briefly explains some basic legal advice in a rape charge.

The elements of rape

The prosecution must prove each element of the crime beyond reasonable doubt. There are four elements of rape. As outlined above, a person commits rape if he or she: (1) sexually penetrated another person; (2) intentionally; (3) without that person’s consent to the sexual penetration; and (4) the accused did not reasonably believe the other person consented to the penetration.

If the prosecution is unable to establish each of these four elements beyond reasonable doubt, then an accused is not guilty of the offence. The job of an expert rape lawyer is to show that one of the elements is not being proved.

The prosecution to prove rape must prove that an accused sexually penetrated the complainant.

Getting another person to do any of these things also satisfies this element and may be rape.

The concept of penetration includes even slight penetration. The prosecution only has to prove that there has been penetration to any extent. Mere touching of the relevant body part is not enough to satisfy this element of a rape charge.4

Penetration only needs to have been slight or fleeting and does not need to have been committed for the purposes of sexual gratification.5 The prosecution is not required to prove that a man ejaculated.

Meaning of vagina
In a rape case Vagina is defined to include the “external genitalia” as well as a “surgically constructed vagina.” Rape can therefore be committed against transsexuals.

The second element that the prosecution must prove is that the sexual penetration was intentional.

The prosecution must also prove that the complainant was not consenting at the time.

Whether or not there was consent is often a central issue in rape trials. Under the Act, consent means free agreement.7 The Act provides a non-exhaustive list of circumstances in which a person is not consenting:

Consent may be given verbally or by a person’s conduct. Consent must be the granting of free and conscious permission.8 A person has not necessarily consented to a sexual act just because they did not protest or physically resist. They have also not consented just because on an earlier occasion they have engaged in a sexual act with that person.9 Agreeing to sex because of threats or duress may mean there is no consent 10. People can also withdraw their consent even if they have previously said it was okay.11

Consent to sex may also be hesitant, reluctant, grudging or tearful12. Pressure put on the person consenting does not mean there is not of itself mean there is no consent. It is a question of degree as to whether the consent is still voluntary or whether it is rape.13

R v Galliene [1964] NSWR 919
In this case the accused had entered the complainant’s bed in the dark while she was asleep and had intercourse with her. When she awoke she permitted him to continue, being under the impression that he was her husband. The accused was convicted of rape.

Element 4: The Accused’s state of mind

If an accused’s intoxication is not self-induced, for example if their drink was spiked, the accused is held to a lower standard and the jury must have regard to a reasonable person who is intoxicated and was in the same circumstances as the accused.

In a rape trial, the questions that a judge will ask a jury to consider are:

Rape is a crime for which innocent people are often wrongly charged. That is clear from our experience as expert rape lawyers and from the number of clients who are acquitted of these charges. A number of defences are potentially available in a rape case. Defences depending on the particular circumstances of each case. Some of these defences include:

Mistaken identity
This defence is generally run by expert rape lawyers when the accused and the complainant did not know each other. Circumstances such as poor lighting or prejudicial photo or line-up identification procedures can result in an innocent person being mistakenly identified. Sometimes these rape allegations are from 30 or more years ago and the accuser is just getting it plain wrong.

There was actual consent
There may have been consent at the time of the sex. We have been lawyers in jury trials for rape where complainants have regretted the sexual penetration and later claimed they did not agree to the sex. These are cases where the complainant may have cheated with an accused for example, or felt ashamed.

The belief of an accused that the complainant was consenting does not have to be reasonable and the unreasonableness of an accused’s belief does not mean that he is guilty,17 however it must have been genuinely held.18

In determining belief in consent any evidence must be considered. Also;

1 Was that belief reasonable in the circumstances?

2 Did the accused take any steps to find out whether the complainant was consenting or might not be consenting?

3 What were those steps?

The victim’s state of intoxication in a rape case
Drunken consent is still consent19. .No rape will have occurred where there is consent. Even if the only reason for consent was being drunk. 20 The critical question is whether the complainant has been rendered incapable of deciding whether to consent or not. The state of intoxication will also be relevant to the witness’s reliability. It is hard to honestly and accurately recall events if you are really drunk .

The accused’s state of intoxication
Intoxication may be relevant to an accused’s state of mind if charged with rape.Did the accused know the complainant was not consenting? The drunkenness of a person accused of rape will be relevant when considering his or her state of mind. The prosecution must rebut any reasonable possibility that intoxication played a part in the accused believing there was consent.21
Maximum Penalty
There is a maximum penalty of level 2 imprisonment (25 years) for this charge.
Sentencing
There was a sentencing snapshot produced by the Sentencing Advisory Council,23 which covers the period 2007-2008 to 2011-2012. It states that rape was the principal offence23 in 2.6% of cases sentenced in the higher courts during this period.

In total, 280 were people were sentenced in the higher courts for 543 charges of rape. All the offenders were men.

Over the five year period of the sentencing snapshot, 93% of people were given an immediate custodial sentence24 and 88% a period of imprisonment on rape charges.

Of course the sentence received will depend on the circumstances of each particular case. These include things such as the offender’s background and prior criminal history as well as the circumstances of the rape. For example, in Ibbs v R (1987) 163 CLR 447, the High Court of Australia found that failing to withdraw when asked is less serious than if no consent was given from the outset.

The most important issue if you are charged with rape is to find an expert rape lawyer who has dealt with many rape cases. Please call us and discuss your case.

To view sentencing decisions by Victorian County Courts for the charge of Rape, visit this page.

Any offence committed after 1 February 2018 for the offence of Rape will be subject to standard sentencing.

The standard sentence for the offence of Rape is 10 years imprisonment.

Case examples from our firm