The offence of Aggravated Assault is in section 24 of the Summary Offences Act 1966 in Victoria. The offence is an assault committed in company or where kicking or weapons are involved.

Have the Police accused you of Aggravated Assault? Our experienced criminal defence lawyers can arrange a confidential conference with you to answer your important questions.

We are criminal lawyers who specialise in criminal defence work and have dealt with many cases of Aggravated Assault.

It is important that you receive legal advice before speaking with Police. We can advise you about what should be said during a Police interview. You may want to know – should I make a statement to Police? Should I attend a Police interview? Do I need to give my DNA? Will the Police leave me alone if I explain my side of the story? Will I be remanded?

If the Police want to speak with you about an allegation of Aggravated Assault, speak with one of our experienced lawyers first. Anything you tell the Police without advice can make running a defence in Court more difficult later on.

We are defence lawyers who specialise in assaults and we can devise a case strategy for you. We have in-house counsels who run our contested hearings and trials who can get involved from the beginning if you are accused of Aggravated Assault.

In a case like this, you want a lawyer who is going to consider – Is there relevant CCTV footage? Is there DNA evidence? Are there people who the Police have not spoken to who can shed some light on this case? Is there exonerating evidence which needs to be preserved?

The answer to these questions can lead to a charge of Aggravated Assault being withdrawn before the contested hearing or an acquittal.

If you are pleading guilty to Aggravated Assault, we can advise you how to prepare your plea to get the possible outcome in Court. We will help you to arrange reports and documents that will help avoid a prison sentence. Call us and discuss how to get the best result. 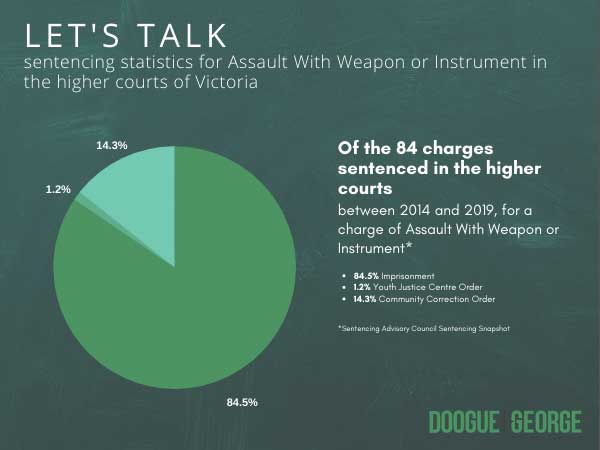 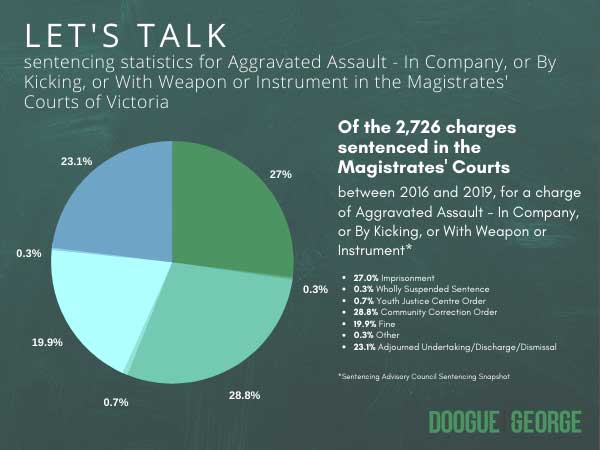 In one case, one of our clients was charged with 13 violent offences involving family violence and including Aggravated Assault. Our client wanted to plead guilty, so we helped him with his plea. After our discussions with the prosecution, our client pleaded guilty to 5 of the original 13 charges. The Magistrate imposed a fine without conviction.

Another of our clients was charged with several serious assault charges, including Aggravated Assault with a bat. We highlighted that our client was not involved in an extended episode of violence, that he had no criminal record and strenuous parenting responsibilities, and that he was remorseful. After discussions, the prosecution agreed to withdraw the original charges and our client entered a guilty plea to a charge of recklessly causing injury. He was fined without conviction.

​Maximum penalty / Court that deals with this charge

Aggravated Assault (s24 of the Summary Offences Act 1966) has a maximum penalty of imprisonment for 2 years.

It is a charge which is generally heard in the Magistrates’ Court.

A serious aggravated assault may mean you go to jail. Less serious incidents may mean a range of penalties from a fine to a Community Correction Order.

What is the legal definition of Aggravated Assault?

There are 2 kinds of Aggravated Assault in Victoria.

The first is when either a female, or a male under the age of 14, is assaulted. If a Magistrate thinks that the punishment for assault is too lenient in the circumstances, the Magistrate may hold that the assault is aggravated.

The Second kind of Aggravated Assault is assault done by more than one person, or by kicking or using a weapon.

The section that covers this offence is section 24 of the Summary Offences Act 1966.

An accused may be found guilty of Aggravated Assault if the Prosecution prove the following elements beyond reasonable doubt.