Incest is the sexual penetration of a descendant. In Victoria, section 50C of the Crimes Act 1958 covers the offence of incest and what a descendant means.

Have you been accused of Incest? Understandably, you will be stressed and fear the consequences of an accusation like this under Incest law. The Police investigation is vital, so it is important that you know what to do during this period. Being accused of Incest can have devastating consequences. It can affect your employment, your relationships with your family, and ultimately it can affect your liberty. 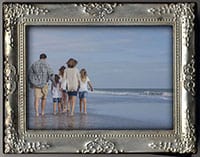 We can help you by answering your important legal questions in confidence.

If the Police want to speak with you about an Incest allegation, call us to speak with one of our experienced lawyers before the interview. The Police are not trying to help you, they are trying to convict you of serious charges.

After an interview the Police normally also apply for a Family Violence Intervention Order. This can stop you from living in your home. The Department of Health and Human Services may get involved if a child is involved. We can give you advice about this.

We are defence lawyers who specialise in allegations of sexual offending and we know how to run successful defences to Incest charges. We can work with you to prepare the best defence strategy to fight an allegation of Incest.

It is important to consider the following questions –

The answer to these and other questions can lead to an Incest charge being withdrawn before a jury trial or being found not guilty.

We are also experienced in appearing in pleas of guilty. We can prepare your plea to get the best possible outcome for you. Our attention to detail can change the outcome of your punishment. A good plea depends on knowing what Judges need to hear and gathering supporting material like psychological reports.

A finding of guilt of Incest will almost always lead to an immediate prison sentence. It will also lead to being placed on the Sex Offender Register for a long period of time (15 years or life depending on the allegations). 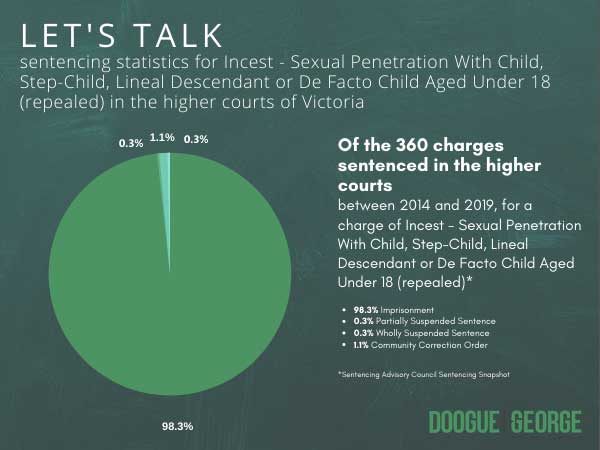 Incest is an indictable offence which means the matter will be heard in the County Court.

The offence of Incest is governed by section 50C of the Crimes Act 1958 (“the Act”) which reads as follows:

2. A person who commits an offence against subsection (1) is liable to level 2 imprisonment (25 years maximum).

3. The standard sentence for an offence against subsection (1) is 10 years if B is, at the time of the offence, under the age of 18 years.”1

Element 1: The accused must have taken part in act of sexual penetration with another person
For Incest, the prosecution must prove beyond reasonable doubt that an accused sexually penetrated the complainant.

The accused’s body part or object does not need to have gone all the way into the other person’s vagina, anus, or mouth; even slight penetration is enough. However mere touching of the relevant body part is not enough, there must have been actual penetration to some extent.2 Further, penetration only needs to have been slight or fleeting and does not need to have been committed for the purposes of sexual gratification.3 If the accused is male, Incest law does not require that the prosecution proves whether the accused ejaculated.

Conduct that would otherwise fall within the definition of sexual penetration will not do so if carried out for proper “good faith” medical and/or hygienic purposes. In such cases, it is for the Prosecution to prove that the accused did not subjectively believe that there was a proper medical or hygienic purpose for their conduct.4

S.35(2) of the Act states that the person who sexually penetrates and the person who is penetrated are both deemed to be taking part in an act of sexual penetration. This means that both parties to an act of sexual penetration may be liable to prosecution for the offence of Incest. However, it has been held that it is not appropriate to class a complainant as an accomplice in Incest cases.

Element 3: The parties must have been in a prescribed family relationship
The relationship between the complainant and the accused must be one of the following:

Under Incest law, adopted children are considered to be children of both adopted and birth parents.

Section 35 of the Act defines ‘de-facto spouse’ as “a person who is living with a person of the opposite sex as if they were married although they are not”.

When determining whether an accused is in a de facto relationship, the jury can consider the following in relation to the de facto’s children:

Element 4: The accused must have known about that relationship.
Except for offences under s44(2), the accused is presumed to know that they are related to the other person in the way alleged. This presumption can be rebutted by evidence to the contrary under the law for Incest.

For example, the accused, in a case of sexual penetration with a de facto spouse’s child who was not known to the accused at the time, cannot be found guilty of Incest.

Unlike some sexual offences, consent is not a defence to Incest.7

Compulsion
An accused will not be guilty of incest if he or she was compelled to take part in the act of sexual penetration.8 The legislation defines compulsion as:


For the purposes of this section, a person compels another person (the victim) to take part in an act of sexual penetration if the person compels the victim (by force or otherwise) to engage in that act without the victim’s consent.9
Other general defences such as wrongful identification, mental impairment, necessity or duress may apply.

Maximum penalty for section 50C of the Crimes Act 1958

Under Incest law, the maximum penalty that may be imposed is 25 years.

Baseline sentences are specified prison sentences that the Victorian Parliament intends as the median sentence for a particular offence. Baseline sentences will be abolished in the very near future, with the Government set to introduce a new sentencing scheme called ‘standard sentence’ scheme.

If the victim is under 18 years, this offence will be considered a category 1 offence.

According to section 5(2G) of the Sentencing Act 1991, a court must impose a custodial sentence for a category 1 offence.

The offence carries a 25 year term of imprisonment as the highest possible sentence. As stated above, the baseline sentence (median) for a person found guilty of the offence of incest where the victim is under the age of 18 years is 10 years imprisonment.

The sentence received depends on the offenders’ background, prior criminal history and the circumstances surrounding the offending. Other factors may be considered as allowed under the laws for Incest.

In Victoria, sentencing of people who commit sexual offences against children has become tougher. It is for this reason; you must speak to one of experienced lawyers so you are fully aware of the hazards of pleading guilty to Incest. If the complainant in your matter is a child, the Court will have no other choice but to impose a term of imprisonment for offences committed on or after 20 March 2017.

Sentencing for incest can be more punitive if the complainant became pregnant. This was the case in the decisions of Director of Public Prosecutions v BGJ and RSJ v The Queen. The Courts in those cases regarded the complainants falling pregnant as aggravating features.

To view sentencing decisions by Victorian County Courts for the charge of Incest, visit this page.