If you have been charged with a Drug offence, you need advice from Melbourne’s expert Drug Offence lawyers.

Get the best possible result.

Request a call back to discuss your case

Have you been charged with a drug-related criminal charge?

Here you will find extensive information about drugs charges and drugs cases including the law in Victoria, penalties and cases we have defended.

Some issues in drugs cases are;

Doogue + George have appeared in some of the largest drug cases to appear before the Courts in Victoria. We also appear often for clients who have been charged with personal use of drugs, achieving great results and often helping them to turn their lives around.

The following table outlines specific quantities for drugs as follows: 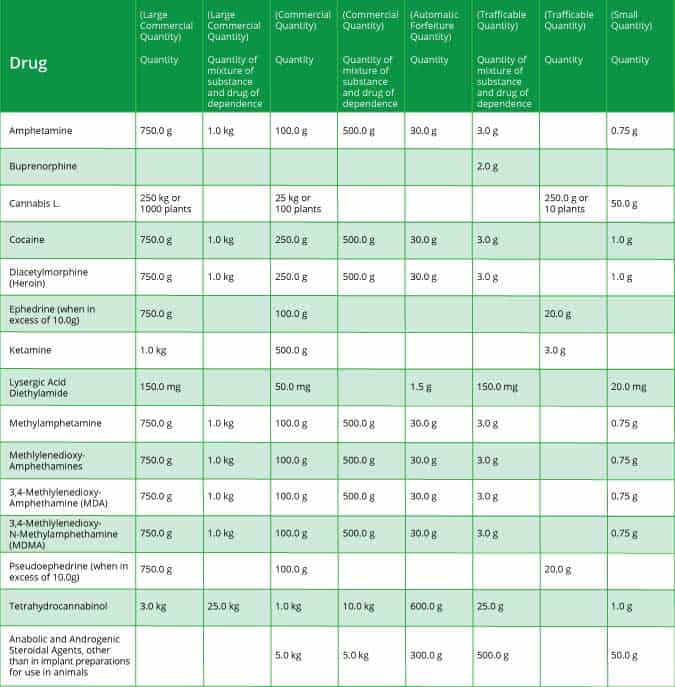 Clink on the links below to read further legal information regarding specific assault charges:

Can’t find the offence you’re looking for? Check out our alphabetised list of all the criminal offences on our site.

If you have been charged with a drug related offence and need advice or legal representation, call  (03) 9670 5111 or Request a Callback from one of our experienced drug offence lawyers.

Deferring a Sentence for a Youth Charged With Numerous Offences

This is a case study on deferring a sentence for a youth charged with numerous offences. Our client was a young man who was heading down the wrong path. He had made a new group of friends. He was gambling, using party drugs, and helping one of his friends sell …
Read More

This is a case study on a sentence of adjourned undertaking for Obtaining Property By Deception and Possess Drug of Dependence. Our client was initially charged with a range of dishonesty and deception offences totalling close to $26,000.00 in overall value. The allegations were that the client and his co-accused …
Read More

Bail Application – Cultivation in a Commercial Quantity of Cannabis

This is a case study on drug possession and trafficking charges resulting in a deferral of sentence. Our client was found unconscious inside his car in a suburban street. Local residents saw him slumped over in the car and called the police. The police could not wake him by banging …
Read More

Our client was charged with trafficking cannabis as well as weapons possession charges after a search was executed by the police on the client’s home. The client engaged our firm to act on their behalf and Sam Cooper took carriage of the matter. Sam met with the client and, as …
Read More