The state offence of theft in Victoria is in section 74 of the Crimes Act 1958. Theft is a criminal offence which is committed by a person who dishonestly takes property belonging to another person with the intention of permanently depriving that other person of the property.

Have you been accused of Theft by Victoria Police? If you have, you should contact our office to arrange a confidential conference with an experienced theft lawyer.

Being contacted by the Police and being asked to attend the Police station for the purpose of an interview can be daunting. You may wonder –

If you decide to plead not guilty to a Theft charge, you want to use a criminal defence firm that is pro-active in their approach. Our theft lawyer will ask the Police – is there are any CCTV footage? Is there DNA evidence? Did the Police recover the stolen property? Are there other witnesses who could shed light on this matter?

The answers to these questions can sometimes lead to a charge of Theft being withdrawn before a contested hearing or an acquittal. Our specialised defence lawyers have represented many people accused of Theft in the past and achieved great outcomes.

Before deciding to plead guilty to a charge of Theft, it is important that you receive some advice about the consequences of doing so. Having a finding of guilt on your criminal history for Theft can have a devastating consequence on your employment, professional licences and your ability to travel to some countries. One of our lawyers can look at your case and determine if the Police have a strong case against you. If they do, our theft lawyer can represent you in Court and conduct a plea in mitigation. This is where our lawyer will be given the opportunity to make carefully crafted submissions on your behalf to persuade the Court to moderate the penalty they decide to impose.

Some things which may assist a plea in mitigation include:

Contact our firm and make a time to speak with our theft lawyer about how to achieve the best outcome possible. 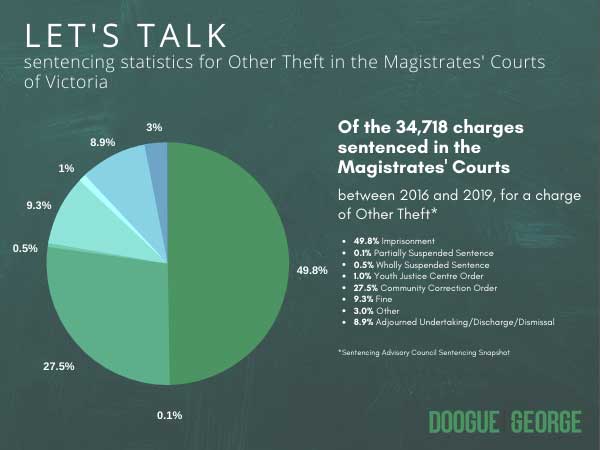 Most charges of theft are heard in the Magistrates’ Court.

The elements of Theft

Theft is created by s 74 of the Crimes Act 1958 (Vic) (“the Act”), however it is defined in s 73 of the Act. Pursuant to that definition, theft has the following three elements:

(i) The accused appropriated something
An accused has ‘appropriated’ property if they have assumed any of the rights of the owner4 or adversely interfered with or usurped the owner’s rights in some way.5 The rights of the owner will depend on the property and the particular circumstances of ownership, however they generally include the right to control the property and the right to possess it. Depending on the circumstances, ‘appropriation’ usually includes taking, using, damaging, extinguishing, lending, retaining or offering to sell another person’s property. An accused will not have ‘appropriated’ property if he or she acted with the owner’s consent6 provided that persons was not obtained by fraud or deception.7

If an accused person found or came across the property innocently, if you found a necklace on the footpath for example, but then kept it or dealt with it as an owner, you will have appropriated it.8

(ii) The thing appropriated was property
While s 71(1) of the Act says that property includes ‘money and all other property real or personal including things in action and other intangible property’,9 exactly what the law considers to be property can be complex.

An accused is deemed to have an intention to permanently deprive a person of property, despite the fact that he or she did not actually have that intention when he or she appropriated the property, if he or she intended to treat the property as his or her to dispose of regardless of the owner’s rights.14 However an accused will only be deemed to have an intention to permanently deprive the owner of the property if the borrowing or lending was for a period, or in circumstances, which made it equivalent to an outright taking or disposal.15

Motor vehicles
Proof that a person used a motor vehicle, in any manner, without the consent of the owner or lawful possessor is conclusive evidence that the person intended to permanently deprive the owner of that property.16

Aside from general defences which may apply such as mistaken identity, a theft lawyer can also look into some complex legal issues which can give rise to defences such as:

In a trial, the questions a judge will ask a jury to consider are:

Maximum penalty for section 74 of the Crimes Act 1958

While theft (s74 of the Crimes Act 1958) is an indictable offence punishable by up to 10 years imprisonment19 the offence may be heard summarily.

Cases handled by our theft lawyer