In Victoria, the offence of Stalking is in section 21A of the Crimes Act 1958 Vic, which is engaging in a course of conduct intending to cause another mental harm.

Are you accused of Stalking? If yes, you will have important legal questions which you will want to ask one of our experienced criminal defence lawyers.

We are criminal lawyers only defend people accused by Police with wrong-doing and have helped many people secure an acquittal for Stalking.

We can advise you about what should be said during a Police interview. You may want to know – should I make a statement to Police? Should I attend a Police interview? Do I need to give my mobile phone? Will the Police leave me alone if I explain my side of the story? Will I be remanded if I give a ‘no comment’ interview?

If the Police want to speak with you about an allegation of Kidnapping, speak with one of our experienced lawyers first. Anything you tell the Police without advice can make running a defence in Court more difficult later on.

You can also have one of our lawyers attend the Police station with you for the interview to make sure you do not say anything you shouldn’t. It is also comforting to have someone on your side.

When dealing with an allegation of Stalking, it is important to engage a lawyer to commence work straight away because there may be evidence which needs to be preserved.

You want a lawyer who is going to be proactive and:

We believe in preparing matters thoroughly for a contested hearing as this leads to great outcomes.

If you are pleading guilty to Stalking, you need to get legal advice about the potential consequences. We can provide you with advice and represent you in a plea in mitigation. We can advise you how to prepare your plea to get the possible outcome in Court. We will help you to arrange reports and documents that will help avoid a prison sentence. 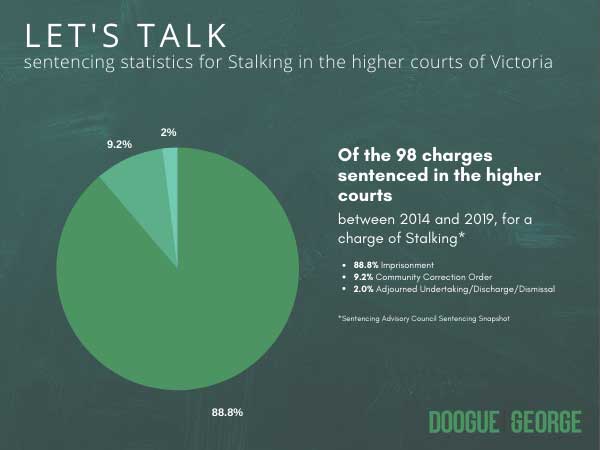 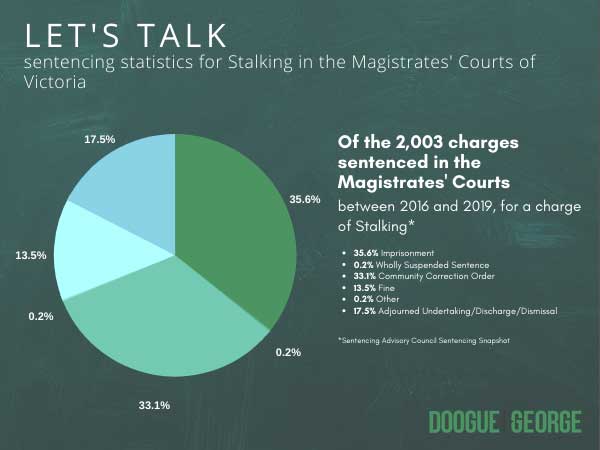 This is an offence that can be heard summarily in the Magistrates’ Court.

Section 21A of the Crimes Act 1958 (Vic) is the relevant provision which deals with stalking.1

For an accused person to be found guilty of stalking, the Prosecution must prove the following elements beyond a reasonable doubt:

Examples of this offence include:

Following the complainant – section 21A(2)(a)
A person is prohibited from following another person with an intention to cause fear or mental harm.

However, this offence will not be made out if the accused simply watches the complainant walk by.5

Loitering – section 21A(2)(c)
A person may be charged with loitering if he/she enters or loiters outside or near the complainant’s home, business or any other place frequented by the complainant.

The prosecution must prove that the accused loitered with an intention to cause physical or mental harm to the complainant, or of arousing apprehension or fear in the complainant’s mind for his/her safety.6

What are some of the possible defences to Stalking?

Section 21A(4A) of the Crimes Act 1958 (Vic) provides that there is a defence available to an accused charge with stalking if he/she can satisfy the Court on the balance of probabilities that there is a lawful explanation for their behaviour such as – they are performing their job, they are involved in an industrial dispute, they are engaging in lawful political protest.

Stalking comes in many forms and there is an excellent clinic at Forensicare that treats the more extreme forms of stalking. It is the sort of conduct where a psychological report is extremely important on a plea of guilty. The reason for this is that the behaviour needs to be placed in a context as to what is underlying it.


“Can the prosecution prove a course of conduct?”

Stalking (s21A Crimes Act 1958) is a serious offence which attracts a maximum sentence of 10 years imprisonment. However, it is an offence that can be heard summarily in the Magistrates’ Court, which can only impose a maximum penalty of 2 years goal. Imprisonment is normally reserved for the worst example of stalking and Community Correction Orders with a condition that the accused engage in a behavioural change program or in counselling is a more common sentencing outcome.

Links to further information about the charge of Stalking:

< Back to Intervention Order Offences
< Back to A -Z of Offences