Affray is common law offence that is often laid in situations where a big fight has occurred. This charge is laid if police suspect that there has been unlawful fighting in a public place. It is generally about groups fighting each other.

Have you been accused of Affray?

You should get legal advice from our affray lawyer before you attend a Police interview for Affray. If you are arrested before you are able to speak with us, tell the Police that you need to speak to your lawyer and we can give you confidential advice over the phone or possibly meet you at the Police station. The Police will interview you with the hope of getting admissions from you regarding the offending and to strengthen their case against you. It is a very rare that anything you say will help your case. The Police are trained in interrogation and in phrasing questions in a way that they can use in Court later to show you are a liar or have inconsistencies in your version.

The Police will normally have already investigated the crime and will have material they will not tell you about.

If you want to contest your charges of Affray, you should contact us as soon as you are charged. We can look through your brief and identify gaps in the Prosecution case that you might not see. We can advise you of possible defences to the charges. We are proactive in our approach and will search for material the Police may have over-looked.

The Magistrate hearing your case has a wide variety of sentencing options with which they can punish you for Affray. Our affray lawyer are criminal law experts. They can explain to the court the unique circumstances of your offending and your personal circumstances so that the Court is aware of who they are sentencing not just what they have done. We can direct you to offence-specific courses to ensure that you receive the fairest sentence possible and get on with your life. 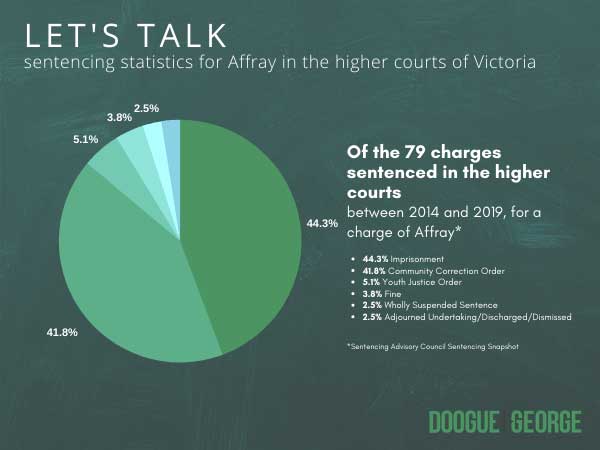 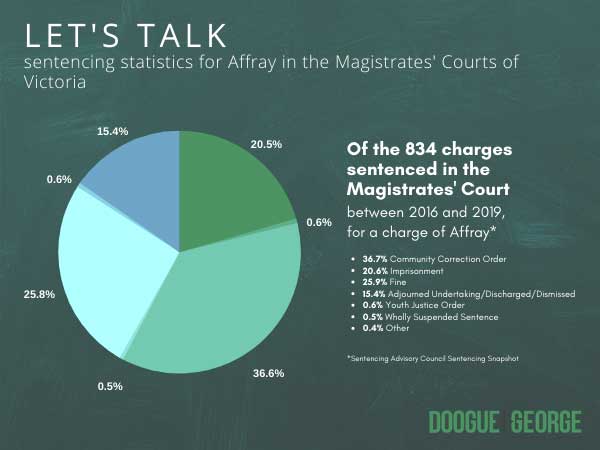 Even if the meaning of affray is satisfied, there are defences recognised by the court that can be used to fight this charge. Often a defence to this charge is that there is a factual dispute about what happened or, depending on the circumstances, that the accused has a claim of self-defence. For self-defence to be raised, it needs to be in the context of duress or necessity. Raising this defence will also invite questions relating to the proportionality of the accused’s response in the particular circumstances.

General defences also used by an affray lawyer are mistaken identity or that the prosecution case is not strong enough to make out each of the elements of the offence. The prosecution must prove the affray beyond reasonable doubt.

Affray by legal definition is an indictable offence, which means that it is triable by a judge and jury in the County or Supreme Court. The maximum penalty for this offence is level 6 imprisonment (5 years) and/or 600 penalty units.

However, this offence may also be heard summarily in the Magistrates’ Court if:

The seriousness of the circumstances surrounding the charge will determine in which Court the matter is heard. Generally speaking, a stand-alone charge of affray is heard in the Magistrates’ Court. More aggravated instances of violence which may also attract other charges, such as intentionally causing injury, are more likely to be heard in the higher courts.

Ultimately, it is the individual circumstances surrounding the charge, and also whether you are pleading guilty or not guilty, that will determine which court is the most appropriate.

There is a broad spectrum of offending which can attract a charge of affray. Therefore, sentences imposed by courts can vary enormously, depending on the seriousness of the offence. The sentencing Magistrate or Judge will commonly consider:

Recent case law in DPP v Russell [2014] VSCA 308 has confirmed that affray is seen by the Court’s as a collective offence, and that individual participants can be held legally responsible for the potentially more serious actions of other participants, even if their own role was limited. However, typically, the instigator will be treated more severely than other participants.

As a common law offence, all sentencing options are available, from the opportunity to participate in a diversion program to an immediate term of imprisonment, and everything in between. For this reason, an affray lawyer needs to assess all of the circumstances of your matter and how they relate to the legal definition of affray to be able to advise of the likely sentencing outcome.

Elements of the offence – The meaning of Affray

To prove the charge of affray, the prosecution must show that the accused was ‘involved in the unlawful use of force in such circumstances that a bystander of reasonable firmness and courage might reasonably expect to be terrified’.

To break it down, this charge has the following three elements, each of which the prosecution must prove beyond reasonable doubt to satisfy the meaning of affray:

The prosecution need not prove for an affray that a bystander was present when the incident broke out. The evidence will determine whether if an innocent person was present, they would have been afraid. Often CCTV footage (where available) is used to assist the Court in making this assessment.

It is also important to note that an affray can take place in either a public or private place. For example, a fight may break out between two people in a person’s private home. All of the available evidence needs to be assessed to decide what took place, and whether each of the above elements can be satisfied beyond reasonable doubt.

Check out some of the criminal cases our affray lawyer has defended in court: