Threats to Safety of Aircraft

Threats to Safety of Aircraft is found in section 246E of the Crimes Act 1958 in Victoria. It is a criminal offence for a person to make a threat to either destroy, damage, or endanger the safety of an aircraft; or to kill or injure all or any of the persons on board an aircraft.

Have you been accused of Threats to Safety of Aircraft? This is a serious allegation and you must obtain legal advice before speaking with the Police. 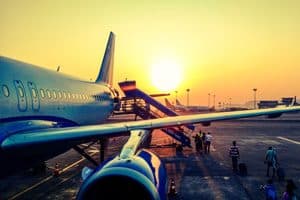 The Police interview is not the time or place for you to tell your side of the story or explain why you did or did not do something. The Police interview is structured to follow the alleged victim’s narrative of what they say occurred and to encourage an admission form you. If there are inconsistencies in your version of events, Prosecution will use this as evidence that you are a liar and are covering up your guilt. Speak to us today to get some advice about speaking to Police if you are accused of this charge.

Our lawyers are experts in Criminal Law and have dedicated their careers to defending people in Court. Going to trial over this charge can be stressful. It is important that you engage competent lawyers who know the best course of action for every step of the Court process. Our firm has in-house counsel who are expert cross-examiners. They can get involved in your case early on working with your solicitor.

Before you plead guilty to this charge, you must understand the likely consequences. Our lawyers will take you through every possible outcome so you can make an informed decision. A strong plea in mitigation made on your behalf can make a huge difference to the sentence you receive. Our lawyers can effectively persuade the Judge that you deserve the fairest possible penalty.

We will work with you to gather supporting material. We can help you obtain medical and psychological reports. Our job is to craft all available material into a persuasive narrative that informs the Court about your personal circumstances and the circumstances of your offending. Everyone has a story to tell and we are committed to hearing it.

It is an indictable offence, but the Magistrates’ Court may hear and determine this charge summarily.

What is the legal definition of Threats to Safety of Aircraft?


“Can they prove you made a threat?”


Examples of Threats to Safety of Aircraft

The legislation for this offence can be found on section 246E of Crimes Act 1958.

To prove this charge the Prosecution must prove the following beyond reasonable doubt:

Defences to this could be a factual dispute or duress.

Maximum penalty for section 246E of the Crimes Act 1958

A person proven guilty of the charge of Threats to Safety of Aircraft (s246E of the Crimes Act 1958) may be sentenced to a maximum penalty of level 6 imprisonment (5 years).