The offence of possessing Prohibited Weapons is found in section 5 of the Control of Weapons Act 1990 in Victoria. It is a criminal offence that is committed by a person who was found to be in possession of a prohibited weapon despite not having the required licence to do so.

Have you been accused of Prohibited Weapons? 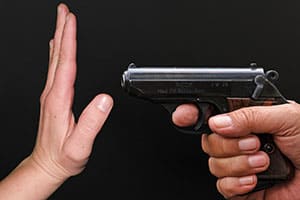 If you have been arrested for possessing Prohibited Weapons, or if you know that police want to interview you about the offence, it is vital that you contact us for assistance. We will arrange a conference with one of our lawyers who will provide you with clear and knowledgeable legal advice about the interview process so you can preserve your legal rights.

Police will only interview you if they suspect you have possessed Prohibited Weapons. They are trained to ask questions in a way to make you seem like you’re lying even though you are not. You will have important questions about the interview, such as:

Our lawyers can answer these important questions.

If you have received a summons for an offence such as possessing Prohibited Weapons, you may also have been served with a bundle of other documents made up of witness statements, expert reports and photographs. This is called the preliminary police brief.

It is important to seek advice from an experienced criminal lawyer when charged with any offence, and this is particularly so in relation to possessing Prohibited Weapons. Your criminal lawyer will assess the evidence in the police brief, request any outstanding material, engage independent experts to analyse forensic material, and represent you in Court.

If you are pleading guilty to possessing Prohibited Weapons, a criminal lawyer’s role is extremely important. For example, one of criminal lawyers will step you through the Court process, advise you how to dress, how to behave in Court and will make detailed submissions to the Court explaining your personal circumstances. Our lawyers are skilled advocates who know what works to get the fairest outcome.

This is a summary offence and hence will be heard by the Magistrates’ Court.

What is the legal definition of ‘Prohibited Weapon’?

Schedule 3 of the Control of Weapons Regulations lists weapons which are prohibited.

The legislation for this offence can be found on section 5 of Control of Weapons Act 1990.

The Prosecution must prove that:


“Can the Police prove that the weapon was in your possession?”

If you have been charged with this offence, you should call us to discuss your case and possible defences. Deciding on whether to plead guilty or not has huge consequences for you and should be made after proper discussion with one of our experienced criminal lawyers.

The maximum penalty for (s5 of the Control of Weapons Act 1990) is a fine of 240 penalty units or imprisonment for 2 years.

< Back to Weapons Offences