Extortion with Threats to Kill

Extortion with Threats to Kill

In Victoria, the offence of Extortion with Threats to Kill is in section 27 of the Crimes Act 1958, which is a demand for property accompanied with a threat to kill if the demand is not met.

Has the Police accused or charged you with Extortion with Threats to Kill? If so, you will undoubtedly have important questions you would like answered. Call our firm to arrange a time to speak with one of our experienced specialist criminal defence lawyers who can help you deal with this charge. 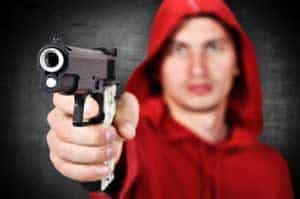 We are criminal lawyers who specialise in criminal defence work and have assisted many people charged with Extortion with Threats to Kill.

If the Police want to speak with you about an allegation of Extortion with Threats to Kill, speak with one of our experienced lawyers first. We can help you to explain what happened in the clearest way.

Our lawyers can also attend the Police station with you. Some people like to have someone there to help you through the process.

We are defence lawyers who specialise in Extortion with Threats to Kill and we can devise a case strategy for you. We have in-house counsel who run our contested hearings and trials who can get involved from the beginning if you are accused of Extortion with Threats to Kill. This is a great option because you will have two lawyers working on your case from the very beginning.

In a case like this, you want a lawyer who is going to be proactive and immediately request material from the Police which can expose the fault lines in the Police case against you.

By requesting material from Police, it may lead to a charge of Extortion with Threats to Kill to be withdrawn or an acquittal at trial.

If you are pleading guilty to Extortion with Threats to Kill, we can represent you at your Plea Hearing. We advise our clients on everything they need to know before entering a plea of guilty. We can advise you how to prepare your plea to get the possible outcome in Court. We will help you to arrange reports and documents that will help avoid a prison sentence. Call us and discuss how to get the best result.
Which court will the case be heard in?
This offence is an indictable offence and is dealt with in the County Court.
Meaning of Extortion with Threats to Kill

The legislation: Extortion With Threats to Kill

A person who makes a demand of another person—

Some examples of this offence

The Prosecution must satisfy the following elements beyond reasonable doubt to prove an someone has extorted another with threats to kill:


“Can they prove you threatened to kill someone?”

Mental elements
The Prosecution does not have to prove that the complainant thought that you would carry out the threat or felt alarmed. They only have to prove that you intended to make the complainant believe that you would carry out the threat whether you were actually going to do it or not.
Defences
There are other possible defences, depending on the circumstances surrounding the alleged offending. Each matter is unique and requires an individual approach and strategy.
Maximum penalty for section 27 of the Crimes Act 1958

Extortion With Threats to Kill (s27 of the Crimes Act 1958) is a serious offence which attracts up to 15 years in gaol.


[1] SACStat Higher Courts – Crimes Act 1958 (Vic) : s 27 – extortion with threat to kill or injure < https://www.sentencingcouncil.vic.gov.au/sacstat/higher_courts/HC_6231_27.html >
[2] Suspended Sentence | The Sentencing Advisory Council < https://www.sentencingcouncil.vic.gov.au/about-sentencing/sentencing-options-for-adults/suspended-sentence >
< Back to Threat Offences
< Back to A -Z of Offences