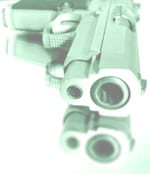 This is a case study on a notice of proposal to cancel firearms licence.

Our client’s firearms licence was suspended following an incident where he wrote a text message to his ex-wife implying that he was going to use his firearm to kill himself. His ex-wife became worried and called the police. The police attended our client’s premises where the firearms were confiscated and he was directed to attend hospital for a psychological assessment. The client was cleared at hospital and returned home were he was served with a Notice of Suspension of Firearms Licence.

Amelia Ramsay acted on the client’s behalf in making submissions to the Licensing and Regulation Division of Victoria Police in order to get his licence back.

To maximise our client’s chance in obtaining a successful outcome, we directed him to undergo a further and more detailed assessment with a psychologist in order to submit a positive report in support of our submissions. We also assisted the client to obtain numerous character references supporting our assertion that he is a fit and proper person to hold a firearms licence. Character references and the psychological report were filed with the client’s affidavit and legal submissions.

We were subsequently advised that the suspension would be lifted and the client’s licence reinstated. This was undoubtedly an excellent result for a case of notice of proposal to cancel firearms licence.

Since joining Doogue + George, Amelia has represented clients in a broad range of indictable offences including, manslaughter (one-punch laws), foreign incursion and terrorism related offences, importation of drugs, cultivation of drugs, and sexual offences. Her work has included trials in the County and Supreme Court, plea hearings and contested committals as well as appeals to the Court of Appeal. Amelia works closely with barristers including briefing Queen’s and Senior Counsel. Amelia also appears regularly at the Melbourne Magistrates' Court and suburban courts as a solicitor advocate.

Check out Amelia's profile to know more about her legal background and specialisations.

DISCLAIMER: This is a real case study of an actual case from our files. Details pertaining to the client have been changed to protect their privacy. The sentence imposed and the charge have not been altered. These case studies are published to demonstrate real outcomes and give an indication of possible tariffs in Court. We do not guarantee a similar case on these charges will get the same result. Please note that we post results at our discretion, therefore while many case studies are average results, others are notable for their exceptional outcomes. PUBLISHED 09/05/2018