Unlicensed Own Category C or D Longarm or Handgun

Have you been accused of Unlicensed Own Category C or D Longarm or Handgun? Legal advice can be the difference between you telling police things which can harm your defence or having charges withdrawn or an acquittal.

From our experience, it is worthwhile for you to get legal advice prior to being interviewed by police for the offence of owning a category C or D longarm or handgun without the required licence. You should contact our office to arrange an appointment with a lawyer.

Often the police interview is the last stage of an investigation and police have already determined that you will be charged with this criminal offence even though they will make it seem this is your opportunity to speak. Anything that is said by you in the interview is recorded and can be used as evidence against you in support of the offence. It is also important to remember that anything you tell police “off the record” will also appear in evidence.

It is important to have legal advice ahead of this process to protect your rights.

A well prepared contested hearing is the key to success when pleading not guilty to the offence of owning a category C or D longarm or handgun without the required licence.

Our lawyers conduct their own investigative work when analyzing the issues that are presented in the evidence relied upon by police. We have conducted many contested hearings for persons who elect to plead not guilty to this offence.

Firearms offences are treated very seriously by the courts. It is important for the court to be made aware of your personal circumstances and the circumstances which surrounded the offending when you plead guilty to owning a category C or D longarm or handgun without the required licence.

We regularly appear in pleas of guilty for people charged with this offence and can assist you in obtaining and presenting the most relevant material to the court to achieve a positive sentencing outcome. 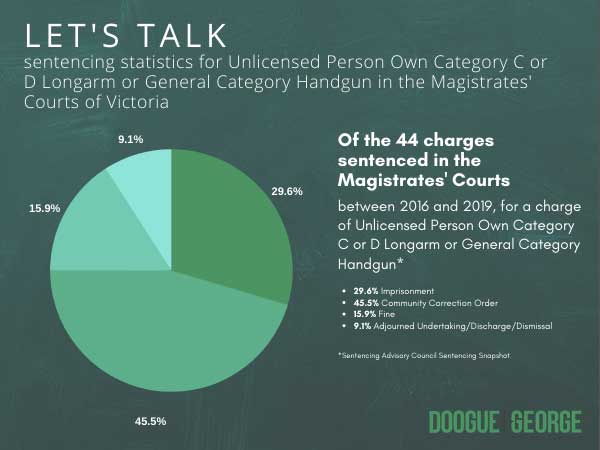 As a summary offence, any summons for this charge will normally be handled by the Magistrates’ Court.

What is the legal definition of Unlicensed Own Category C or D Longarm or Handgun?

Examples of Owning a Category C or D Longarm or Handgun

The legislation for this offence can be found on section 135(2) of the Firearms Act 1996.

Defences that can be run in response to this charge include necessity, lack of intent, sudden or extraordinary emergency, incorrect factual matrix and the concept of beyond reasonable doubt.