Unlicensed Own Category A or B Longarm 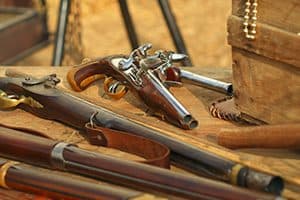 Without a licence, it is illegal to possess a category A or B longarm under section 135(1) of the Firearms Act 1996. This is a serious charge that can carry significant penalties if an accused is proven guilty. You should have a lawyer evaluate your case before deciding whether to contest or enter a plea of guilty to any criminal allegation of this nature.

Examples of Unlicensed Own Category A or B Longarm

What are some of the possible defences to Unlicensed Own Category A or B Longarm?

Defences that can be run in response to this charge a lack of the necessary intent to possess, sudden or extraordinary emergency, incorrect factual matrix and the concept of beyond reasonable doubt.

This offence has a maximum penalty of a fine of 60 penalty units or 12 months imprisonment. As a summary offence, this charge will primarily be handled by the Magistrates’ Court.

What is the legal definition of Unlicensed Own Category A or B Longarm?

A person must not own a category A or B longarm unless that person is authorised by a licence under this Act to possess the firearm.

The legislation for this offence can be found on section 135(1) of the Firearms Act 1996.

“Can they prove that you were not authorised to own a firearm?”

There were 65 cases (75 charges) of Unlicensed Own Category A or B Longarm that were heard in the Victorian Magistrates’ Courts from 1 July 2013 to 30 June 2016. These cases resulted in the following sentences:

Of the cases that led to prison terms, 20% received the longest term imposed: somewhere between 12 and 18 months. Majority were sentenced to periods that were between 6 and 12 months. For the fines, the highest imposed was somewhere between $10,000 and $20,000 and was imposed to 2.6% of the charges that led to fines (for aggregate). The majority were however sentenced to an amount that was between $500 and $1,000 (36.8%).1