Trafficking in Drugs of Dependence (Large Commercial Quantity) is found in section 71 of the Drugs, Poisons and Controlled Substances Act 1981 in Victoria. It is a criminal offence that is committed by a person who trafficked or attempted to traffick in a drug of dependence in a quantity that is higher than the commercial quantity applicable to that drug.

Have you been accused of Trafficking in Drugs of Dependence (Large Commercial Quantity)? This charge will almost certainly lead to a term of imprisonment if you are found guilty. 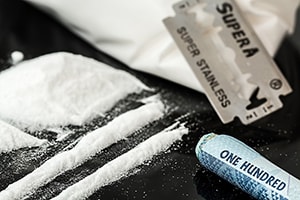 It is sensible to get advice before attending a Police interview. Did you know we can attend an interview with you if you wish to make sure your rights are protected? You should answer the initial questions establishing your identity and regarding whether you understand the interview procedure. Following that it is usually advisable to answer ‘no comment’ except in certain circumstances.

You should be polite and dress well because your interview will be played to a jury or Judge during your trial.

You should speak with one of lawyers before attending to ask your important questions. Commonly asked questions are:

The burden is on the prosecution to prove their case against you beyond reasonable doubt. Our defence lawyers are experts in raising doubt by cross examining witnesses and objecting to evidence being put before the jury. Our committed lawyers can increase your chances of an acquittal by highlighting weaknesses in the prosecution case. We have in-house counsel who are Trial specialists and are extremely skilled in cross examination of witnesses and persuading juries that our clients are not guilty.

A sentencing Judge has a wide discretion and as to a range of sentences. Our lawyers are experts in Criminal Law and a well-made plea in mitigation by them can ensure that you get the fairest outcome.

Our lawyers are committed to explaining to the Court what kind of person you are so that the Judge is aware of who they are sentencing and not simply focusing on the offending. We will help you gather reports and character references and take your personal history. This information will give the sentencing Judge a complete picture of you to understand why you committed the offence. 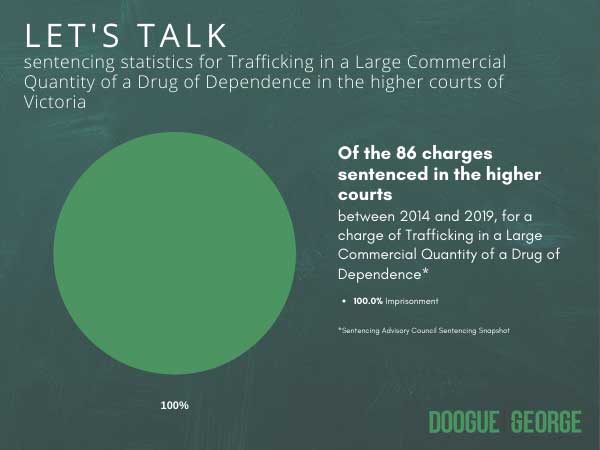 Penalty and sentencing for section 71 of the Drugs, Poisons and Controlled Substances Act 1981

The offence of Trafficking in a Drug or Drugs of Dependence – Large Commercial Quantity (s71 of the Drugs, Poisons and Controlled Substances Act 1981) has a maximum penalty of life imprisonment. In addition to imprisonment, the court can impose a fine of up to $792,850. It is a statutory requirement that the court impose a gaol sentence for this offence. This means that the court must imprison someone if they are found guilty of this offence.

This type of charge is heard in the County Court and cannot be heard in the Magistrates’ Court. There is a presumption against getting bail for this charge which means that the court will lock you up unless they believe that there are exceptional circumstances for you to be released on bail.

Any offence committed after 1 February 2018 for the offence of Trafficking in Drugs of Dependence Large Commercial Quantity will be subject to standard sentencing.

The standard sentence for the offence of Trafficking in Drugs of Dependence Large Commercial Quantity is 16 years.

To prove this offence, the prosecution must show that the accused intentionally trafficked or attempted to traffick in a drug or drugs of dependence not less than a large commercial quantity of the drug/drugs of dependence and without being authorised by or licensed to do so under the act.

The law surrounding this simple proposition can be very complex. Given the complexity of drug law, you should ring us and discuss your case if you have been charged.

Case study related to the charge of Trafficking in a Drug or Drugs of Dependence – Large Commercial Quantity:

You may also visit this page to view sentencing decisions by Victorian County Courts for the offence of Trafficking in a Drug or Drugs of Dependence – Large Commercial Quantity.