The offence of Tax Evasion is found in section 61 of the Taxation Administration Act 1997. It is a criminal offence for a person to deliberately avoided paying tax.

Have you been accused of Tax Evasion?

It is important that you receive legal advice before speaking to the ATO in relation to allegations of tax evasion. One of our lawyers can assist you by running you through with what you can expect during an interview and what your obligations are if they compel you to produce financial documents. Our lawyers are proactive in their approach and can engage forensic accountants to assist with your case if it will assist. 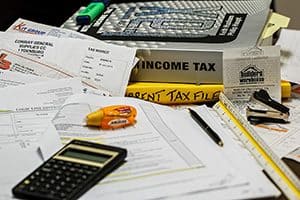 If the ATO want to speak with you about an allegation of Tax Evasion, speak with one of our experienced lawyers before you are interviewed. It’s important to remember that whatever you say in an interview can be used against you later in court.

Our firm consists of experienced criminal lawyers and in-house counsel who can develop a strategy to contest your charge of Tax Evasion.

Contact our firm if you are pleading guilty to a charge of Tax Evasion. Having an experienced criminal lawyer present your plea of guilty will help you get the best outcome. We will explain your personal circumstances to the sentencing Court and tender expert reports and character references to help mitigate the offending.

What is the legal definition of Tax Evasion?

A person must not, by a deliberate act or omission, evade or attempt to evade tax.

The legislation for this offence can be found on section 61 of Taxation Administration Act 1997 (‘the Act’).

To prove this charge, the Police must prove the following beyond reasonable doubt:


“Did you deliberately avoid paying your tax?”

Defences to this charge can include a factual dispute or a lack of intent.

You should ring us and discuss your case if you have been charged. Deciding on whether to plead guilty or not has significant implications for you and should be made after proper discussions with a criminal lawyer.

Maximum penalty for section 61 of the Taxation Administration Act 1997

The maximum penalty for Tax Evasion (s61 of the Taxation Administration Act 1997) is a fine of 1,000 penalty units in the case of a body corporate. In any other case, the court may impose a maximum of 200 penalty units or imprisonment for 2 years, or both.