Robbery is found in section 75 of the Crimes Act 1958 in Victoria. It is a criminal offence that is committed by a person who performed a theft and, immediately before or at the time of doing so, used force on any person. Have you been accused of this offence? Call a robbery lawyer immediately for expert legal advice.

If you have been contacted by police to attend an interview, we recommend seeking legal advice from a Robbery lawyer before you go. It is important that you know what you should and should not say in a police interview. Each case has a unique set of circumstances and your lawyer will consider the facts from your case. Your lawyer will help you consider your options. Some questions you have might include: If the Police want to speak with you about an allegation of Robbery speak with one of our experienced lawyers first. Anything you tell the Police can be used against you later on so it is important to have a professional strategize with you from the beginning. We see many people make the mistake of speaking with the Police without speaking with a lawyer first and making comments about things which makes it hard for them to defend the charges later on. One of our lawyers can attend your police interview with you. The support is there if you need it.

Our robbery lawyer routinely assists clients with charges of Robbery. We have in-house counsel who run our contested hearings and trials who can get involved early on to achieve the best possible outcome in relation to your charge of Robbery. In a case like this, you want a lawyer who is going to consider the evidence that the police have against you. We will consider – Is there relevant CCTV footage? Is there DNA evidence? Are there people who the Police have not spoken to who can shed some light on this case? Is there exonerating evidence which needs to be preserved? The answer to these questions can lead to a charge of Robbery being withdrawn early in the process. We believe it is important for our clients to understand what they are facing. When working with one of our lawyers, you will be assisted with a case strategy to increase the chances of this charge being withdrawn or leading to an acquittal.

If you decide to plead guilty to Robbery, our lawyers can help you achieve the best result possible. Our lawyers will add value to your plea of guilty to Robbery by preparing your case well before Court and ensuring that you understand the process ahead. Our Robbery lawyer knows what submissions to make in court to properly explain your personal circumstances to the Court. 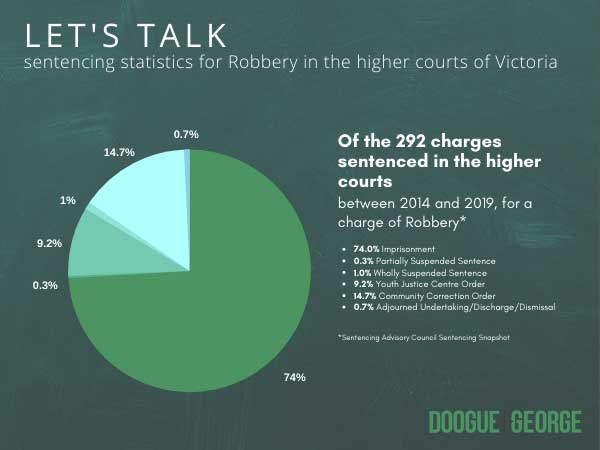 Possible Defences to a Robbery Charge

Aside from general defences such as mistaken identity and factual dispute, defences to this charge can include duress imposed on the accused by another, lack of intent, and the concept of beyond reasonable doubt. A defence to the charge may also be an honest belief in the accused to a claim of right to the property obtained. Without an act of theft, which within itself requires the accused to appropriate property belonging to another and which is a major component defining a robbery charge, this offence cannot be made out. In a trial, the questions a judge will ask the jury to consider are:

Robbery (s75 of the Crimes Act 1958) is an indictable offence, which means that it may be heard in the higher courts. However, it is generally the sort of charge regularly heard in the Magistrates’ Court as it is incredibly rare for the value of the property alleged to have been stolen to exceed $100,000.00. It is sometimes heard in the County Court if a person is initially charged with an armed robbery and that charge results in being withdrawn or a jury finds a person not guilty of the element of being armed. Hence the offending will fall exactly within the meaning of “robbery” and not within that of “armed robbery”. In terms of the sentencing range available, the Act stipulates that the offence carries a 15 year term of imprisonment as the highest possible sentence. However the maximum term of imprisonment that can be imposed in the Magistrates’ Court for a single offence is two years. Further, the maximum aggregate total sentence that can be imposed is five years.1 Depending on the circumstances of the offender and the nature of the robbery, it may also be possible to argue for a penalty that does not involve any actual gaol time, such as a Community Corrections Order.

The Elements: What Circumstances Will Satisfy the Meaning of Robbery?

Pursuant to section 75(1) of the Act, the Prosecution must prove the following elements: These elements constitute the legal definition of robbery and they need to be established beyond reasonable doubt to prove that the accused is guilty.

Cases handled by our Robbery lawyer: