In Victoria, Refuse Drug Test – Drug Driving is found in section 49(1)(ca) of the Road Safety Act 1986. It is a criminal offence that is committed by a person who refused to undergo an assessment for drug impairment when required to do so, or who refused to comply with any other requirement made under section 55A(1) of the Road Safety Act 1986. Note that if the Police request that you undergo drug test, you have the option to refuse a drug test. However you can be charged for this. There can be more serious consequences for refusing to do a drug test rather then returning a positive drug test. The Police have significant discretion available to them when requesting for a drug test. 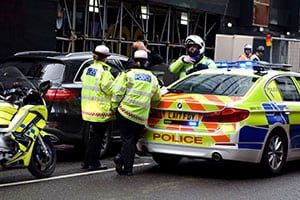 Have you been accused of Refuse Drug Test – Drug Driving? If you have, make a time to see one of our specialised criminal defence lawyers who have represented many people charged with Refuse Drug Test.

Our lawyers’ enormous experience in representing people charged with Refuse Drug Test. Our lawyers know what works in Court and can advise you on what you can expect.

If you are accused of Refuse Drug Test, the Police normally conduct a field interview on the side of the road or at a booze bus. You are still given an opportunity to call a lawyer and receive legal advice. You should call our firm and speak with one of our lawyers who can advise you on how to handle the interview.

It is important to remember that the Police take careful notes of everything said and will use anything you tell them to assist their case. The Police interview is not the time to explain your side of the story and hope the Police will realise there is a misunderstanding. In a case like this, the Police will just think you are being uncooperative because you have something to hide and they will not take anything you say seriously.

Generally, the charge of Refuse Breath Drug Test is laid because of a misunderstanding. Our lawyers can give you realistic advice on your prospects of having the charge withdrawn or an acquittal. Our lawyers are pro-active and will ask:

This information can lead to charges being knocked out.

Our lawyers will add value to your plea of guilty to Refuse Drug Test by preparing your case well before Court and directing you to do courses which show the Magistrate you have learnt your lesson. It is worth remembering that the Magistrate you appear before can hear upwards of 40 driving offences that day. Our lawyer will prepare your case so that you get the best outcome. 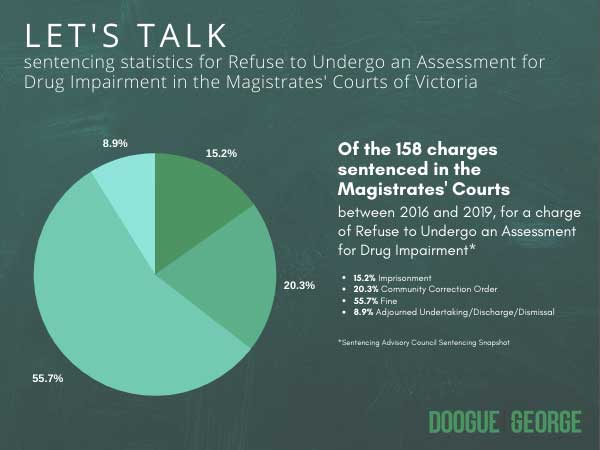 The offence of refusing a drug test drug driving is the sort of charge regularly heard in the Magistrates’ Court.

What is the legal definition of Refuse Drug Test (Drug Driving)?

A person is guilty of an offence if he or she— refuses to undergo an assessment of drug impairment in accordance with section 55A when required under that section to do so or refuses to comply with any other requirement made under section 55A(1);


“Did you refuse a drug test?”


Elements of the offence

In essence to prove this charge the Police must show that the accused refused to undergo an assessment of drug impairment when required to do so or refused to comply with any other requirement made under the section.

Defences to this can be a factual dispute or that when the person was asked to undergo an assessment of drug impairment, more than 3 hours had passed since the person last drove, was an occupant of or was in charge of a motor vehicle.