Reckless Conduct Endangering Serious Injury is found in section 23 of the Crimes Act 1958 in Victoria. It often occurs in driving incidents where the accused conducted themselves in a such a way that other people were placed in danger of acquiring serious injuries. A serious injury is defined as an injury that endangers life or is substantial in magnitude. It can also be defined as a combination of multiple injuries that, when combined, creates a serious injury.

Have you been accused of Reckless Conduct Endangering Serious Injury? 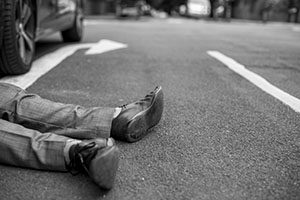 You should call us for advice before going in for a Police interview. If you are being interview by Police it is likely that they have passed the investigation stage and are preparing to charge you with Reckless Conduct Endangering Serious Injury. The Police are not always engaged in a search for the truth. The Police are trying to obtain the necessary evidence to charge you. Any admissions you make or inconsistencies in your answers, however innocent they may seem to you, can be used against you in Court. You should seek advice from our lawyers before you make any comment to Police.

Having the best possible lawyers conduct your trial could be the difference between an acquittal and a guilty verdict. This is a serious charge and you need expert criminal defence lawyers to increase your prospects of being found not guilty. Our firm has the distinction of having in-house counsel, which means you can speak with your Trial counsel from your first meeting at our office and they will be engaged throughout the entire process.

Our firm has run many jury trials and have achieved not guilty verdicts in the past. Our lawyers are best placed to assist you.

You may have admitted wrongdoing in the interview or the evidence against you is very strong. Our task is to resolve the case on the most appropriate charge, ensure the summary is fair and to make a plea in mitigation so that you receive the most favourable sentence possible. We will take the time to listen to your instructions and ensure we tell your story, both of your life and of your offending, so that the Court can impose a penalty which is fair in the circumstances. 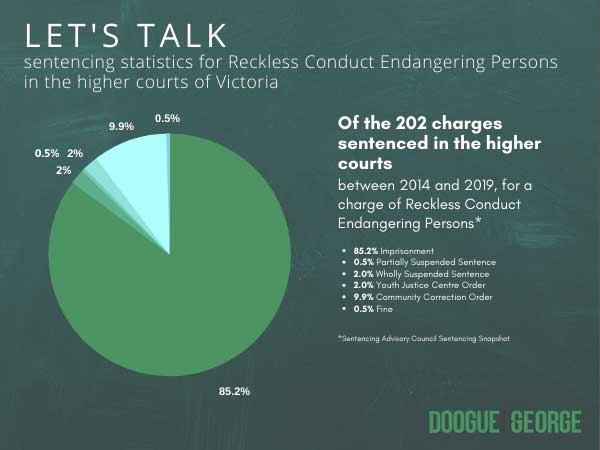 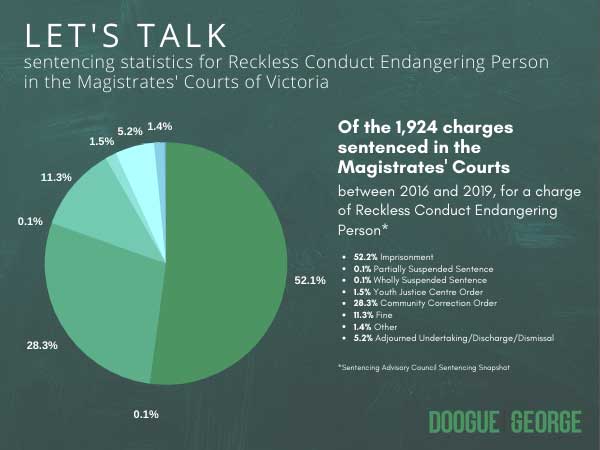 This would typically be heard in the Magistrates’ Court but could be heard in a higher court depending on the circumstances.

Our client was a young man in his early 20s. He was driving home with a passenger in the car after having been out with his friends. At around 3:30 AM, the client went to make a turn into an intersection but misjudged the distance, and accidentally veered into a wrong lane and into oncoming traffic. A police car observed him doing this and had to take evasive action to avoid colliding with the vehicle. The client tried to exit the road as quickly as possible and, in so doing, lost control of the vehicle and collided with a brick fence. He was charged with reckless conduct endangering serous injury but we were able to have the charge withdrawn.

What is the legal definition of Reckless Conduct Endangering Serious Injury?

A person who, without lawful excuse, recklessly engages in conduct that places or may place another person in danger of serious injury is guilty of an indictable offence.


“Are you accused of recklessly causing serious injury?”

The legislation for this offence can be found on section 23 of Crimes Act 1958.

What are some of the possible defences to Reckless Conduct Endangering Serious Injury?

Defences to this can often be a factual dispute, a lack of intent, mental impairment, necessity, absence of recklessness, or self defence.

Deciding on whether to plead guilty or not to this charge has important implications for you and should be made after proper discussions with a criminal lawyer.

Maximum penalty for section 23 of the Crimes Act 1958

A person found guilty of Reckless Conduct Endangering Serious Injury (s23 of the Crimes Act 1958) may be sentenced to a maximum penalty of 5 years imprisonment.