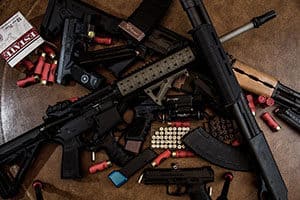 A person will be charged with possessing a trafficable quantity of unregistered firearms contrary to section 7C of the Firearms Act 1996 if he/she is in possession of ten or more unregistered firearms. The seriousness of this charge lies in the fact that there are so many guns that the authorities have not been able to keep track of.

What are some of the possible defences to Possessing Trafficable Quantity of Unregistered Firearms?

A person charged with this offence may rely on one of the following defences:

Before pleading guilty to this charge, you should call one of our experienced solicitors to discuss your case and potential defences available.

Penalty and the court that deals with this charge

This offence may result in a fine of up to 1,200 penalty units or 10 years imprisonment on a finding of guilt, and a very high likelihood of the weapons getting confiscated.

What is the legal definition of Possessing Trafficable Quantity of Unregistered Firearms?

To be in possession of firearms, the Prosecution must demonstrate that you had custody or control or have access to the firearms.

This offence can be found in section 7C of Firearms Act 1996.

To prove this charge the Prosecution must prove that the accused possessed more than ten guns and that the guns were not registered.

“Can the Police prove that you possessed 10 or more unregistered firearms. “