In Victoria, Obtaining Financial Advantage By Deception is found in section 82 of the Crimes Act 1958. It is a criminal offence that is committed by a person who has engaged in a deceptive and dishonest conduct which resulted in that person obtaining a financial advantage for themselves or for someone else.

Have you been accused of Obtaining Financial Advantage By Deception? If you have, get in contact with us to arrange a confidential conference with one of our experienced criminal defence lawyers to ask your important questions. Our lawyers have successfully represented many people charged with Obtaining Financial Advantage by Deception. We can prepare a defence strategy for you. 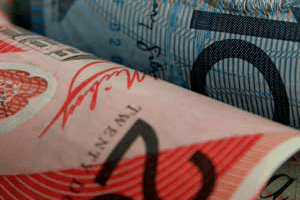 Did you know that before police can formally interview you about the allegation of Obtaining Financial Advantage by Deception, you will be placed under arrest? Do you understand your rights when you are in a police interview? Are you aware of your obligations? It is very important that you seek expert legal advice from our lawyers before attending for a police interview, rather than during or after the interview.

Obtaining Financial Advantage by Deception is a complex criminal charge. It might involve for example, unravelling an extensive paper trail. It is the type of charge that requires an experienced criminal lawyer to thoroughly analyse the brief of evidence, and to seek additional evidence that will assist with your successful defence.

When you are pleading not guilty, our criminal lawyers will not only expertly prepare your defence to the charge, we will also ensure that you understand what is involved at each stage of the Court process prior to the final hearing of your matter.

Perhaps the evidence against you is overwhelming. Perhaps you did not exercise your right to silence in your interview with police and made full admissions to the charge of Obtaining Financial Advantage by Deception. If you are pleading guilty to a dishonesty charge you should engage one of our lawyers to represent you at the earliest possible stage. 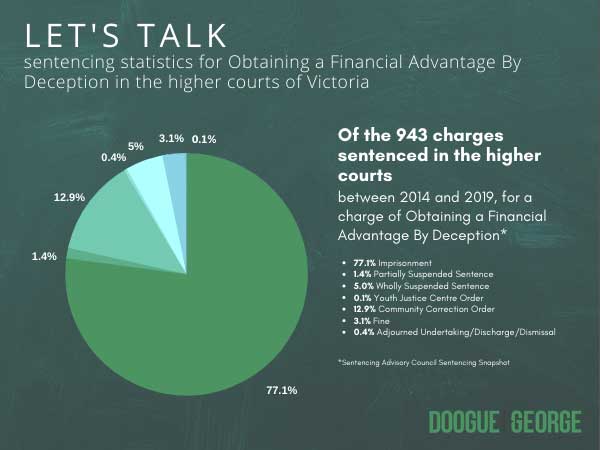 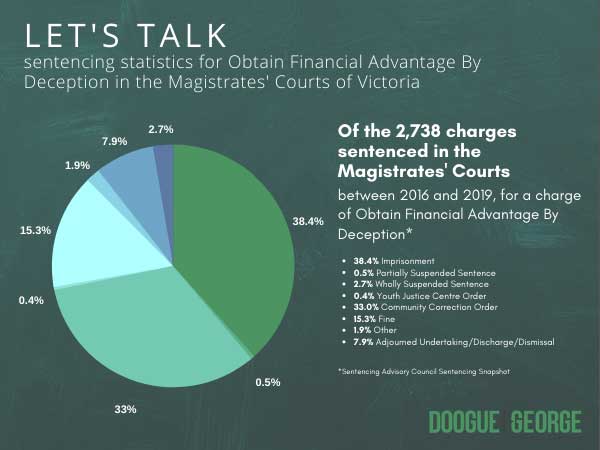 Obtain financial advantage by deception is an indictable offence, which means that it may be heard in the higher courts; however it is often also dealt with in Magistrates’ Court. The seriousness of the circumstances surrounding the charge will determine where the matter is heard.

A charge of obtain financial advantage by deception is within the limits of the Magistrates’ Court if:

What is the legal definition of Obtain Financial Advantage By Deception?”

There are three elements that constitute the offence of obtain financial advantage by deception. The prosecution must prove each of them ‘beyond reasonable doubt’ to prove their case against the accused person. If the prosecution is unable to do this, the accused is not guilty of obtaining a financial advantage by deception. As criminal lawyers part of our role (if the case is being contested) is to investigate cases and identify problems in the prosecution case, to show that one or more of the elements are not proven.

This element focuses on the accused’s state of mind.

The leading case on the meaning of the word ‘dishonesty’ under the Act in Victoria is R v Salvo:

In my opinion “dishonestly”, in this statute, is used in that sense of “with disposition to defraud” which means “with disposition to withhold from a person what is his right” and in the special context thus imports into the offence the element that the actor must obtain “the property” without any belief that he himself has any legal right to deprive the other of it.6

So under the Act a key question to be asked when assessing dishonesty is whether the accused person believed they had a legal right to undertake the relevant action.

The offence of obtain financial advantage by deception can raise legal issues in relation to the intention of the accused. If a jury considers that it is reasonably possible that the accused did not intend for the complainant to act upon their representation which in turn allowed them to obtain the financial advantage, then the accused will not be guilty of this offence. Without the requisite intent the offence is not made out.

Lack of knowledge is also a defence available to the charge if the accused did not have knowledge that their representation was false (or deceptive) or probably false at the time it was made. In determining this, a jury must be satisfied that the accused themselves knew, or knew of the likelihood that the representation was untrue. The objective reasonable person test is not applied in this instance.

In a trial, the questions a judge will ask the jury to consider are:7

Maximum penalty for section 82 of the Crimes Act 1958

The Act stipulates that the offence of obtaining a financial advantage by deception (s82 of the Crimes Act 1958) carries a 10 year term of imprisonment as the highest possible sentence. The maximum term of imprisonment that can be imposed in the Magistrates’ Court for a single offence is two years. Further, the maximum aggregate total sentence that can be imposed is five years.8

Check out some of the criminal cases we’ve defended in court that involve the offence of Obtain Financial Advantage By Deception: