This charge is generally laid in situations where a person knowingly, by false representation, obtains or attempts to obtain a drug of dependence from a person authorised by or licensed under this Act to possess, manufacture, sell or supply the drug of dependence. 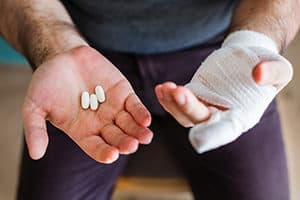 Which court will the case be heard in?
This is the sort of matter that will be heard in the Magistrates’ Court.
Meaning of Obtaining Drugs of Dependence by False Representation

What is the legal definition of Obtaining Drugs of Dependence by False Representation?


“Can the Prosecution prove you lied to obtain a drug of dependence?”

Examples of Obtaining Drugs of Dependence by False Representation

The legislation for this offence can be found on section 78 of Drugs, Poisons and Controlled Substances Act 1981.

The prosecution must prove that the accused:

Defences
The following defences are available to a person charged with this offence:

You should call us to discuss your case with one of our experienced lawyers if you have been charged with this offence.

Pleading guilty or not guilty has important implications for you and should be made after proper discussions with a criminal lawyer.
Maximum penalty for section 78 of the Drugs, Poisons and Controlled Substances Act 1981

If found guilty of Obtaining Drugs of Dependence by False Representation (s78 of the Drugs, Poisons and Controlled Substances Act 1981), the maximum penalty which the Court may impose is a fine of 20 penalty units (around $3,300) or 1-year imprisonment, or both.

From 1 July 2013 to 30 June 2016, the Magistrates’ Courts of Victoria heard 26 cases (591 charges) of Obtaining Drugs of Dependence by False Representation. Most of these cases resulted in Community Correction Order (30.8%) and financial penalties (30.8%). Imprisonment was also imposed in 19.2% of the cases, adjourned undertaking/discharge/dismissal in 11.5%, and wholly suspended sentence in 7.7%.