Handling Stolen Goods is in section 88 of the Crimes Act 1958. It is a criminal offence that is committed by a person who dishonestly received goods knowing or believing that the goods were stolen.

Have you been accused of Handling Stolen Goods? One of our lawyers can advise you of what to expect during the investigation and Court process. It is important you know what to expect so you do not say anything to someone which can harm your defence later on in Court. 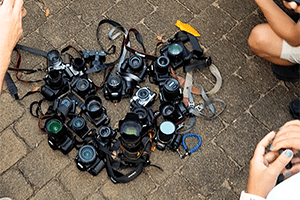 Before attending a police interview in relation to a charge of Handling Stolen Goods, it is vital that you speak to a lawyer. Calling Doogue + George Defence Lawyers will put you in touch with someone who has experience representing people charged with Handling Stolen Goods.

We will ensure that you understand your rights and obligations including detailed instructions on how to make a no comment interview. The police interview is not the place where you explain your side of the story and hope that the matter will go away. Police officers are trained to ask questions in a way which would make it seem as though you are not telling the truth if you decide to answer them.

Our lawyers will consider:

The answers to these questions can lead to an acquittal.

Before you decide to plead guilty to Handle Stolen Goods, one of our lawyers can advise you of the likely consequences and represent you in Court. A well-prepared plea can be the difference between a non-conviction or conviction outcome, the latter having a direct impact on your everyday life. We will ensure we know everything about your personal history and the circumstances that lead to the offending to be able to tell the Court a story about you that will persuade them to impose the lowest possible penalty. 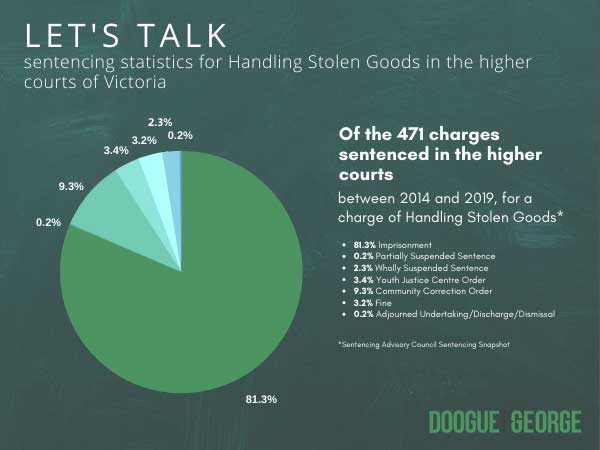 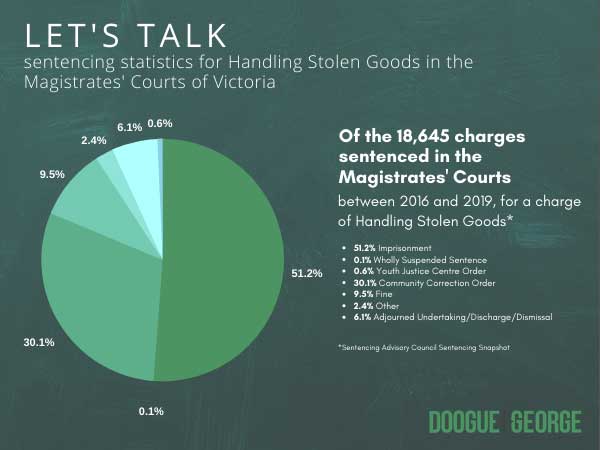 Handling stolen goods is an indictable offence, which means that it may be heard in the higher courts; however, it is often dealt with in Magistrates’ Court. The seriousness of the circumstances surrounding the charge will determine in what court the matter is heard.

If the value of the goods exceeds $100,000.00 or if it is attached to more serious dishonesty charges, it may then be heard in the higher courts. This offence is a medium range dishonesty offence which does not generally carry a gaol term when guilt is established in the Magistrates’ Court and if it is a single first offence.

The elements of Handling Stolen Goods

There are four elements that constitute the offence of handling stolen goods:

Element 1: Accused handled the goods
Handling is defined in the Act as the retention, removal, disposal or realisation by or for the benefit of another person. Goods include money, every other type of property except land (i.e. clothing, electronics, books) and things severed from the land by stealing.

You should be aware that a person who receives the goods and does nothing more, does not handle them. The accused must have done one of the below actions:

Receiving goods means the accused takes them into his or her possession.3

The prosecution must establish that the accused had custody or control over the goods and intended to have custody or control over them. In a case where it is alleged that the act of handling involved the retention, removal, disposal or realization of stolen goods, someone who simply receives stolen goods will not meet the definition of ‘handling’, as they must do something further. This further action could firstly involve an act of retaining, assisting another to retain or arranging for the retaining of the goods. Secondly, this further action could also be for the benefit of another person, or arranging it to be for the benefit of another person.4

Undertaking means that the accused undertakes one of the prohibited activities himself/herself.

Assisting means that the accused helps another person to perform one of the above listed prohibited activities. An accused can assist in an activity even if the assistance is futile.

Selling stolen goods for an accused’s own benefit does not make out the handling charge (for example selling stolen goods and keeping all the proceeds). To have “handled” the goods, the accused must have sold them for the benefit of a person other than the purchaser.

If this charge is heard in the higher courts, the prosecution should clarify in the indictment which form of handling is alleged.

An accused may admit that the goods were stolen having the required knowledge after being charged. This does not necessarily mean that they knew them to be stolen at the time. The circumstances that give rise to the goods being in their possession can also be sufficient proof that they were stolen. The Prosecution can make enquiries to the owner of the goods, if traceable or known, to satisfy this element.

To determine whether the accused knew or believed, the jury may also turn to the circumstances of the alleged offending. In R v Woods,5 evidence that an accused had driven a car containing stolen goods out of a street, then on seeing the police, had reversed back into the same street and when subsequently questioned had denied that he possessed the keys in the car, was admissible as it was relevant to the issue of guilty knowledge.

Element 4: The accused handling of the goods was dishonest
The prosecution must prove that when the accused, by deception, obtained the property, he or she was acting dishonestly. That being that the accused himself or herself did not believe that he or she had, in all the circumstances, a legal right to obtain the property.

Lack of knowledge is a defence available to the charge if the accused did not have knowledge that the goods handled were stolen. Other defences available include factual dispute, duress, wrongful identification, mental impairment, honest and reasonable mistake or necessity.

In a case involving the charge of Handling Stolen Goods, the questions that will be considered are:

Maximum penalty for section 88 of the Crimes Act 1958

The Act states that the offence of Handling Stolen Goods (s88 of the Crimes Act 1958) carries a 15 year term of imprisonment as the highest possible sentence. However, the maximum term of imprisonment that can be imposed in the Magistrates’ Court for a single offence is two years. Further, the maximum aggregate total sentence that can be imposed is five years.


< Back to Theft Offences
< Back to A -Z of Offences