The offence of Going Equipped for Stealing is found in section 91 of the Crimes Act 1958. It is a criminal offence for a person to be in possession of any article for use in the course or in connection with any burglary, theft, or cheating.

Have you been accused of Going Equipped for Stealing? You should call us to arrange to have your important legal questions answered. 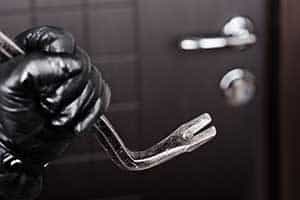 The police will only interview you about an allegation of Going Equipped for Stealing if they suspect you are guilty of this charge. They will make it seem as though the interview is your ‘one and only opportunity’ to explain your side of the story. This is not true.

The best thing you can do for yourself before attending a police interview in relation to an allegation of going equipped to steal, is to speak to a lawyer. One of our lawyers will listen to your case and provide you with a comprehensive understanding of the interview process.

You can make a no comment interview, or you can respond to police questions. Knowing your rights and obligations when being interviewed by police will help you to feel as comfortable as possible in a stressful situation. Knowing what to say will ensure you are protected in the earliest stages of your matter.

If you deny the allegation that you were equipped to steal, you will be pleading not guilty to the charge against you. At Doogue + George Defence Lawyers we will help you to understand the Court process and the steps it will take to reach an outcome in your case. Additionally, we will prepare to strongly defend your case. This may involve briefing in-house counsel to appear in Court. Our expert defence lawyers will review the brief of evidence in detail and look for inconsistencies in the police investigation. Sometimes the police do not find all of the available evidence. The first step is to conduct a comprehensive review of the brief of evidence to identify weaknesses in the prosecution case.

One of our lawyers will vigorously defend you against the allegations in Court and advise you of your options so you are fully aware of how your matter is progressing.

A plea hearing is your chance to convince the Court you should receive the lowest possible penalty available to you for being equipped to steal. The Court will want to hear about the circumstances that lead to the offending, your personal circumstances both past and present and any other factors that might reduce the penalty being considered. To support submissions made to the Court about penalty, it is important to obtain material to support them such as:

Obtaining advice from Doogue + George Defence Lawyers will help to ensure you do not miss an opportunity to minimise the penalty. 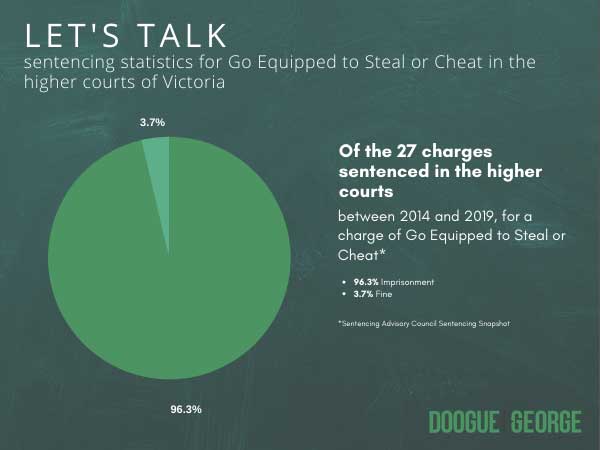 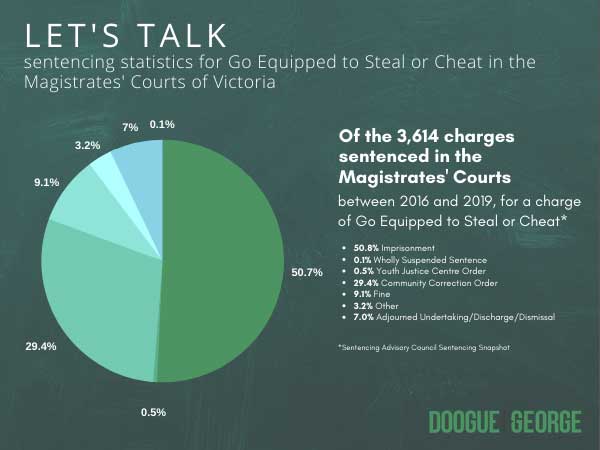 This charge is regularly heard in the Magistrates’ Court.

What is the legal definition of Going Equipped for Stealing?

A person shall be guilty do a summary offence if, we hen not as his place of abode, he has with him any article for use in the court of or in connection with any burglary, theft or cheat.

Examples of Going Equipped for Stealing

This legislation comes from section 91 of the Crimes Act 1958.

To prove this charge the Police must show that the accused had an article with them for the purpose of a theft, burglary or cheat. The accused must not have been at their place of residence at the time of the offence.

Possible defences to this charge could be duress, a factual dispute, lack of intent and necessity. Can the prosecution prove that you had the item on your person at the time and furthermore that the item was to be used in the execution of a theft beyond reasonable doubt?

Deciding on whether to plead guilty or not will have major implications for you and should be made after proper discussion with a criminal lawyer. You should ring us and discuss your case if you have been charged.

A person found guilty of Going Equipped for Stealing (s91 of the Crimes Act 1958) can be sentenced to 2 years imprisonment (Level 7 imprisonment).


< Back to Theft Offences
< Back to A -Z of Offences