Driving Under the Influence of Intoxicating Liquor or of Any Drug (DUI) is found in section 49(1)(A) of the Road Safety Act 1986 in Victoria. It is committed by a person who was found to have driven or have been in charge of a motor vehicle whilst under the influence of any intoxicating liquor or drug to such an extent as to be incapable of having proper control of the motor vehicle.

Have you been accused of Driving Under the Influence of Intoxicating Liquor or of Any Drug (DUI)? 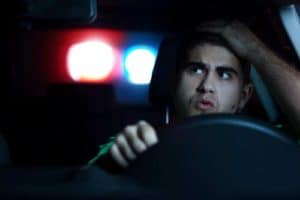 The Police will conduct a field interview where they will ask you standard questions about how much alcohol you consumed that day if they think you are above the limit. The Prosecution will rely on the evidence of your reading and your responses to the field interview questions as evidence in Court to prove the charge of DUI against you.

If you dispute a DUI charge, there will be material that needs to be subpoenaed from Victoria Police. Possible defences include:

Our defence lawyers are experienced in contesting DUI charges and can guide you through the Court process.

Before deciding to plead guilty to a charge of DUI, one of our experienced defence lawyers will explain the penalties to you so you know exactly what you are facing. It is important to understand that in addition to time off the road, there are also interlock conditions that apply to certain readings.

Depending on the circumstances of your case, a Magistrate might exercise their discretion to interfere with your driver’s licence for a period longer than the prescribed minimum. Our lawyers will look at the facts of your case and advise you of courses you should complete before your Plea Hearing to prevent this from happening.

Our lawyers are sympathetic to the fact that for some clients their driver’s licence is crucial to their livelihoods. Our lawyers ensure that the Magistrate is aware of this. 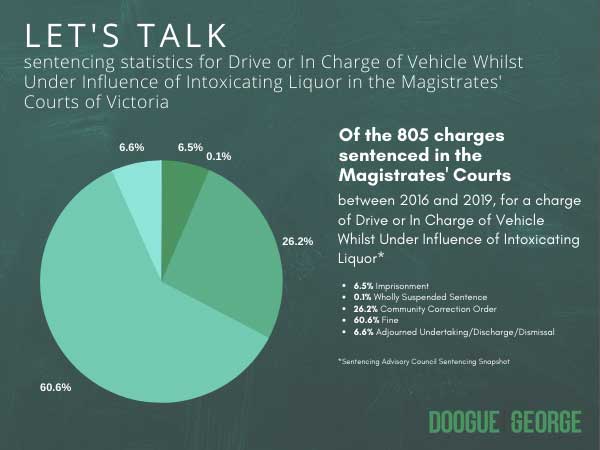 There is a maximum penalty of 6 months imprisonment and/or a fine of 25 penalty units for anyone found guilty of driving under the influence of intoxicating liquor or of any drug (s49(1)(A) of the Road Safety Act 1986) as a first offence.

If you are caught testing positive to traces of illegal drugs then your licence will be disqualified for 6 months and you must attend a drug driver behaviour change program.

The maximum penalty for a second time offence is 12 months imprisonment and/or a fine of 120 penalty unit.

For subsequent offences, the maximum penalty is 18 months imprisonment and/or a fine of 180 penalty units.

The offence of driving under the influence (DUI) is the sort of charge regularly heard in the Magistrates’ Court.

You are likely to get a fine or a Community Corrections Order for a first time offence. If you have been found guilty of this offence before and you have other charges, then you may receive a prison sentence.

What is the legal definition of Driving Under the Influence of Intoxicating Liquor or of Any Drug (DUI)?

Driving while under the influence of intoxicating liquor or any drug.


“Were you drink or drug driving?”