The offence of Cultivating Narcotic Plants is found in section 72B of the Drugs, Poisons and Controlled Substances Act 1981. It is a criminal offence for a person to cultivate or attempt to cultivate narcotic plants in a quantity that is smaller than the commercial quantity.

Have you been accused of Cultivating Narcotic Plants? You should make time to call our office to speak with one of our experienced criminal defence lawyers. You will have important legal questions that you want answered.

You must get some advice from one of our lawyers before speaking with the Police. You will want to know:

One of our experienced lawyers can explain the investigation process to you so you know what to expect. Also, one of our lawyers can attend the Police interview with you to ensure you do not say or do anything which harms your defence later on.

If you intend to contest an allegation that you Cultivated a Narcotic Plant, we have experienced lawyers to represent you in Court. Our lawyers will:

This proactive approach can lead to an acquittal or charges being withdrawn before the contested hearing.

If you decide to plead guilty, we can work with you to achieve the best possible resolution. There may be scope to negotiate the details of the charge or the summary of alleged facts. We will obtain details of your background and personal circumstances to help us best present your story to the Court. We can also recommend relevant courses and counselling, as well as gathering character references. This is all preparation that helps to achieve the best sentence possible. 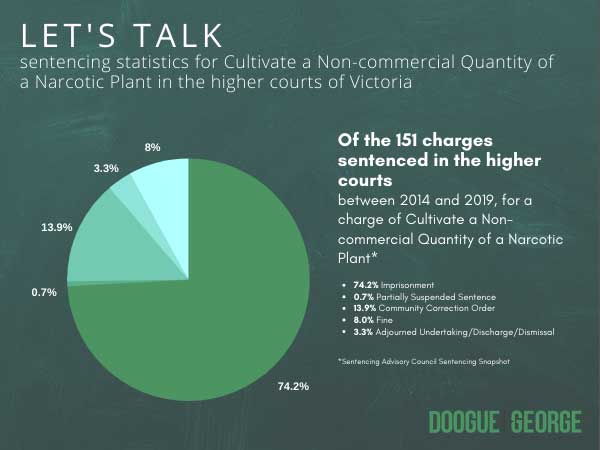 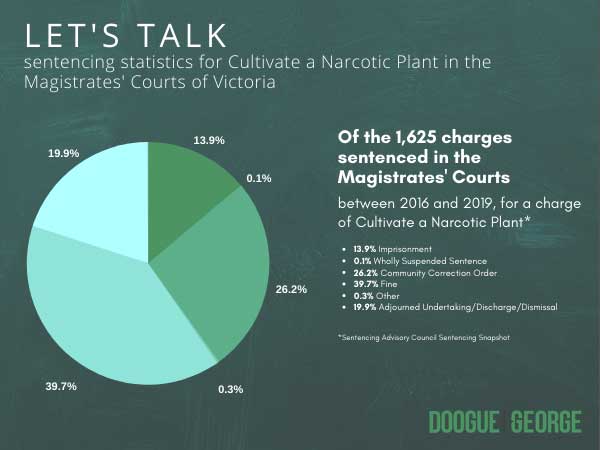 Under this section where we are dealing with a non-commercial quantity, any such cultivation charge could be heard in the County Court or summarily in the Magistrates’ Court.

The decision on which jurisdiction will hear a case often reflects the seriousness with which the indictment or summons is viewed and/or and the quantity or scale of the operation. The circumstances surrounding cultivation charges will determine where a case will be heard. For instance, a small scale, unsophisticated cannabis plant set up in a person’s garage containing a single plant may be heard in the Magistrates’ Court as opposed to a larger scale hydroponic cannabis set up for the purpose of trafficking. The second example is likely to be heard in the County Court (please note that these are examples and every case will be assessed on its own facts).1

This offence of cultivate narcotic plants (such as cannabis) is governed by section 72B of the Drugs, Poisons and Controlled Substances Act 1981 (“the Act”) which reads as follows:


A person who, without being authorised by or licensed under this Act or the regulations to do so, cultivates or attempts to cultivate a narcotic plant is guilty of an indictable offence and liable—

This list is not exhaustive and other acts can be seen to satisfy the definition of cultivate. Generally, any act which may be viewed as assisting in the growth of a narcotic plant or cannabis may give rise to cultivation charges.

We have often found that the Police will charge a number of people in relation to the same cannabis cultivation charges because various items identifying them have been found at the address where the cannabis cultivation is occurring. A criminal defence lawyer can best assess the strength of a police brief against you.

The prosecution must prove the following:

Element 1: The accused intentionally cultivated a plant
Taking part in any step of the growing process will be considered ‘cultivating’ for the purpose of this section. A person can take part in the process for example, by watering the plants even if the plant is not theirs, supplying electricity, checking up on growth progress or transporting equipment or materials. Providing or arranging finance for the operation may also be deemed cultivating. Whatever the act that constitutes the cultivation, the relevant act must have been performed intentionally for a cultivation charge to be valid. The accused must have known that the narcotic plant, was a narcotic plant.

Intention may be evident by an admission of the accused however, in most cases it will be necessary to infer the requisite intention from the act and the circumstances in which it was performed.3

In some cases, it may also be possible to infer an intention to cultivate a specified quantity from the fact that:

Evidence that a person is in possession of cannabis is not evidence that the he or she cultivated the plants which provided the cannabis.5

The accused may have a defence under s.72C of the Act. This is discussed further below.

Authorisation/Licensing
In order for this defence to apply, the accused must prove on the balance of probabilities, that they were appropriately authorised or licensed. The provisions relevant to the authorisation and licensing are found in Division 2 and 4 of the Act.

Defences to a charge of cultivate narcotic plant can also include but are not limited to sudden or extraordinary emergency, involuntary act, mental impairment, wrongful identification, factual dispute, necessity or duress may apply.

In a trial involving cultivation charges, the questions a judge will ask the jury to consider (in the event the accused is raising a section 72C defence of lack of knowledge of narcotic plant) are:

Maximum penalty of section 72B of the Drugs, Poisons and Controlled Substances Act 1981

Cultivate cannabis or other narcotic plant (s72B of the Drugs, Poisons and Controlled Substances Act 1981) is an indictable offence that carries a significant penalty. The offence carries a 15-year term of imprisonment as the highest possible sentence.