Recklessly Cause Injury is found in section 18 of the Crimes Act 1958 in Victoria. The offence is where you  engage in careless conduct which results in another suffering an injury.

Are you accused of this offence? Call one of our experienced criminal defence lawyers to arrange a conference to answer your questions. 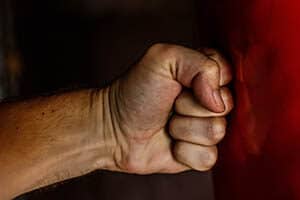 We are criminal lawyers who specialise in criminal defence work and have successfully defended many people charged with Recklessly Cause Injury.

It is important that you receive legal advice before speaking with Police. We can advise you about what should be said during a Police interview. You may want to know – should I make a statement to Police? Should I attend a Police interview? Will the Police leave me alone if I explain my side of the story? Will I be remanded if I don’t answer their questions?

If the Police want to speak with you about an allegation of Recklessly Cause Injury, speak with one of our experienced lawyers first. Anything you tell the Police without advice can make running a defence in Court more difficult later on.

You can also have one of our lawyers attend the Police station with you for the interview to make sure you do not say anything you shouldn’t.

When dealing with an allegation of Recklessly Cause Injury, it is important to commence work straight away because there may be evidence which needs to be preserved.

You want a lawyer who is going to be proactive and:

We take allegations of Recklessly Cause Injury seriously.

If you are pleading guilty to Recklessly Cause Injury, we can talk in Court for you. We can advise you how to prepare your plea to get the possible outcome in Court. We will help you to arrange reports and documents that will help avoid a prison sentence. Call us and discuss how to get the best result. 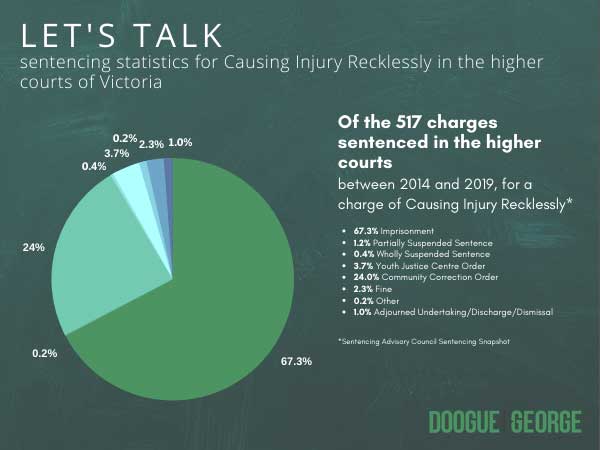 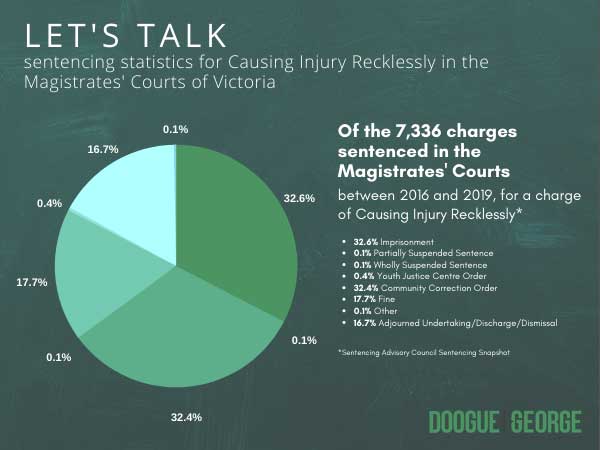 Recklessly cause injury is an indictable offence, which means that it may be heard in the higher courts; however it can also be tried summarily in the Magistrates’ Court. The seriousness of the circumstances surrounding the charge will determine the jurisdiction where the matter is to be heard.

Generally, a stand-alone charge of recklessly cause injury is heard in the Magistrates’ Court. More aggravated offending would see it before the higher courts, particularly in situations where there is a primary offence of serious nature to which it attaches as a secondary offence. The circumstances surrounding your charges will determine which avenue is appropriate.

The Statutory Provision for Recklessly Cause Injury


“1. A person who, without lawful excuse, intentionally or recklessly causes injury to another person is guilty of an indictable offence.”1

There are four elements that constitute the offence of Recklessly Cause Injury:


“Can they prove that the Complainant suffered an injury?”

In a trial for Recklessly Cause Injury, the questions a judge will ask the jury to consider are:


“1. Did the complainant suffer an injury? (Consider – Injury means physical injury or harm to mental health, whether temporary or permanent
Consider – Physical injury includes unconsciousness, disfigurement, substantial pain, infection with a disease, and an impairment of bodily function
Consider – Harm to mental health includes psychological harm but does not include an emotional reaction such as distress, grief, fear, or anger unless it results in psychological harm.)
If yes, then go to 2.
If no, then the accused is not guilty of recklessly cause injury.

3. Was the accused aware that his/her conduct would probably injure the complainant?
If yes, then go to 4.
If no, then the accused is not guilty of recklessly cause injury.

4. Did the accused act without lawful justification or excuse?
If yes, then the accused is guilty of recklessly cause injury (as long as you have also answered Yes to questions 1, 2 and 3).“5


Possible Defences to Recklessly Cause Injury

There are often arguments about the intention of the accused at element 3. That is an issue of what injury was foreseen when the fight occurred. Other defences can be ones such as a factual dispute about who was responsible for the fight, lack of intent, wrongful identification, mental impairment, necessity, or self-defence. The availability of a defence of self-defence turns on whether the force used was reasonable and proportionate in all the circumstances.

In terms of the sentencing range available, the Act stipulates that the offence of Recklessly Cause Injury (s18 of Crimes Act 1958) carries a 10 year term of imprisonment as the highest possible sentence. However the maximum term of imprisonment that can be imposed in the Magistrates’ Court for a single offence is two years. Further, the maximum aggregate total sentence that can be imposed is five years.6

This offence is a medium – high ranging violent offence which does not generally carry a goal term when guilt is established in the Magistrates’ Court, provided it is a first offence that is not particularly gruesome.

Check out some of the criminal cases we’ve defended in court involving the charge of Recklessly Cause Injury: