Aggravated Burglary is contained in section 77 of the Crimes Act 1958 in Victoria. This is a burglary committed either with an offensive weapon or while occupants of the property were present.

Our criminal lawyers specialise in allegations of Aggravated Burglary.

You should not want to say anything to the Police which can harm your defence later on. Contact one of our lawyers for legal advice before participating in a Police interview. We can answer your important questions such as:

If the Police want to speak with you about an allegation of Aggravated Burglary, speak with one of our experienced lawyers first. Anything you tell the Police without advice can make running a defence in Court more difficult later on.

Our lawyers can also attend the Police station with you if you feel more comfortable having someone on your side to make sure you do not say something you are not obliged to say that will hurt your case.

The answer to these questions can lead to a charge of Aggravated Burglary being withdrawn or an acquittal.

Our firm are criminal defence lawyers who have dedicated our careers specifically to representing people charged with offences such as Aggravated Burglary. We have successfully defended people accused of Aggravated Burglary in the past.

If you are pleading guilty to Aggravated Burglary, we can present your plea of guilty to get the best outcome. We will explain your personal circumstances to the sentencing Court and tender expert reports and character references which we can help you gather. 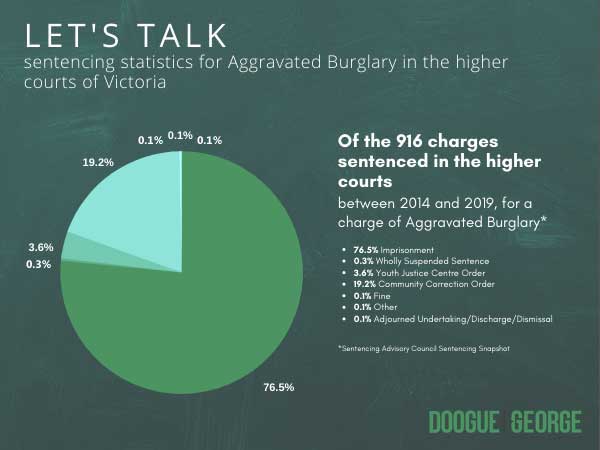 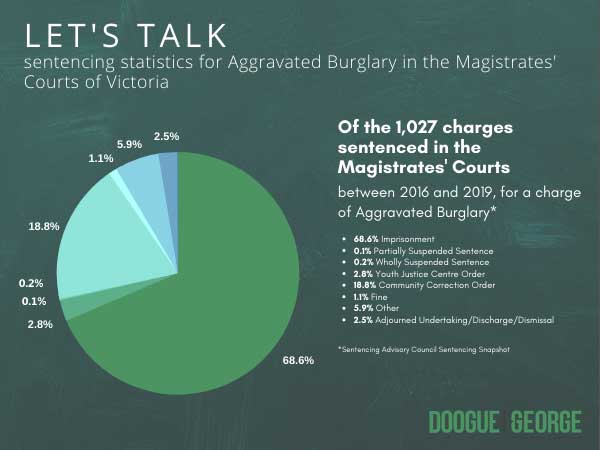 Aggravated burglary is an indictable offence, which means that it is triable by a judge and jury in the County or Supreme Court.

However, this offence may also be heard summarily in the Magistrates’ Court if:

More serious examples of aggravated burglary will be heard in the County or Supreme Courts.

Ultimately, it is the individual circumstances surrounding the charge that will determine which court is the most appropriate.

Elements of the offence of Aggravated Burglary

Section 77 defines the elements that the prosecution must prove beyond reasonable doubt to satisfy a charge of aggravated burglary:

Firstly, conduct capable of amounting to a charge of burglary must be present. The prosecution must prove that at the time of entry the accused entered the building (or part of the building) as a trespasser, that being without right or authority to enter. For instance, a person may have limited authority to enter a building at a particular time or for a particular purpose. An example of this may be entry into a place of work between the hours of 9am – 5pm (and what would be reasonable outside that scope to perform work-related tasks) or entry into certain parts of a building but prohibited from other parts. In such cases, any entry outside those terms may amount to a trespass.

A person doesn’t need to successfully carry out the offence involving theft, assault or property damage to satisfy this element, as long as it was their intention to do so at the time of entering the building.

This element will only be met if the accused knew that he or she had the article with him or her, or that the article was available for use.

Aggravated burglary when a person was present

For the purpose of this section, the prosecution must prove at the time of the burglary the accused either:

The threshold to establish recklessness is quite high in the sense that the accused will not have acted recklessly simply because he or she ought to have known, or thought it was possible, that a person is present in the building.

An accused is reckless to whether or not a person is present in a location if he or she believes that a person is probably present. The accused must have turned his or her mind to the likelihood. For instance, if the accused saw a light on or came across an unlocked door at the building which is usually unoccupied at 11pm, turned their mind to the probability that someone was present and went ahead and trespassed regardless of that fact, there is a strong likelihood that this element will be made out.

Often the defence to aggravated burglary is that there is a factual dispute about what happened or an assertion that the alleged victim let the accused into the premises by consent. There are also a lot of cases run on the basis of witnesses wrongly identifying who was involved in the alleged crime.

Aside from general defences which may apply such as mistaken identity, the offence of aggravated burglary can raise complex legal issues in relation to the intention of the accused. Lack of intent can be a defence to this charge if the prosecution do not provide adequate evidence that the accused had the requisite intention. That is that at the time of entry into the premises to steal, assault or damage or the intention to use a weapon carried for the purpose of the burglary. For both of these scenarios, intention must be present at the time of entry.

Maximum penalty for section 77 of the Crimes Act 1958