In Victoria, Violent Disorder is found in section 195(I)(1) of the Crimes Act 1958 and replaced the charges of Riot and Rout. It is a criminal offence that is committed by a person who was found to have been part of a group of 6 people or more and who used or threatened unlawful violence for a common purpose. Their joint conduct must have caused injury to a person or damage to property. 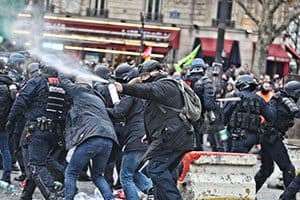 Have you been accused of Violent Disorder? This is a serious allegation and must be given priority. You should call our office to book a confidential conference with one of our defence lawyers. You will have important questions which need to be answered before you speak with the police.

It is very important that you obtain legal advice prior to attending an interview for the offence of Violent Disorder. Police officers will have gathered as much evidence as they could before the interview such as witness statements and CCTV footage, which they will not show you before the interview. They will sometimes ask you questions to fill in any gaps they have in their investigation.

A police interview is not a search for the truth. Often the police have already made a decision to charge you, the interview being the last step in the investigation process.

You have the right not to answer questions put to you by the police and in fact in most cases it is in your best interests. Our lawyers have experience in dealing with charges of Violent Disorder. You should make an appointment to speak with one of us prior to a police interview.

We can also attend a police interview with you for Violent Disorder to support you. The interview process is daunting because it is conducted at the police station with two police officers asking you questions. You may find it comforting to have someone there who is on your side.

Our lawyers are experts in representing people charged with Violent Disorder. We pride ourselves on our reputation for finding issues with a police investigation and undertaking our own investigations to persuade the Court that you are not guilty.

It is essential to start preparing for a not guilty contested hearing from the very beginning of the Court process. You should set up a conference with us to discuss your options. We have in-house barristers who are accredited criminal law specialists and they can get involved in your matter from the outset.

Pleading guilty to Violent Disorder can have a number of consequences to your life. Our lawyers can assist you to prepare for your guilty plea hearing to place you in the best position for a positive outcome. The preparation for a guilty plea can make all the difference to the penalty that you receive. Our lawyers will help you:

We often appear in pleas of guilty for Violent Disorder and can help you with your case.

This charge would be heard in the Magistrates’ or County Court depending on the severity of the circumstances.

What is the legal definition of Riot?

Six (6) or more people unite with a common purpose to injure or threaten a person or damage property.


“Have you been accused of violent disorder?”

The legal elements of the offences are, in essence – where six or more people are present with a common purpose which is executed or started to be executed. Each of them must have had an intent to help one another by force if necessary against anyone who opposes their purpose.

The prosecution must also establish that they used force or violence in such a manner as to intimidate by the standard of a reasonable person.

Defences to this can be a factual dispute about who did what. By their very nature riots are a mess and it is often very hard to establish who did what.

The maximum penalty for Violent Disorder (section 195I(1) of the Crimes Act 1958) is 10 years imprisonment, or 15 years imprisonment if the face covering is used to conceal identity or to protect from crowd controlling substances.