Setting Fire to Aircraft is found in section 246B of the Crimes Act 1958. It is a criminal offence that is committed by a person who unlawfully and maliciously set fire to, or in any way destroyed, an aircraft.

Have you been accused of Setting Fire to Aircraft? 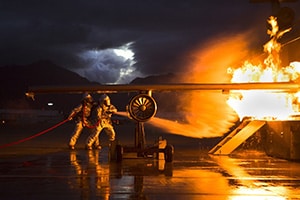 Before you speak with police, you should get legal advice from one of our lawyers. We can assist you developing a strategy in relation to your interview and help guide you through commonly asked questions.

If you make mistakes in the interview, you may make running a defence in Court more difficult later on. The purpose of the interview is to get admissions from you or highlight inconsistencies in your story to trip you up. Do not treat the police interview as an opportunity to explain your side of the story and hope the police will leave you alone.

We have many lawyers who can assist with a charge of Setting Fire to Aircraft. We know how to carefully read the police brief of evidence and identify key issues in the case against you. The police might have missed important information or there may not be enough evidence to support the charge.

Our firm has in-house counsel who appear at contested hearings and trials. To increase the potential for the best outcome, you should engage with a solicitor and in-house counsel as soon as possible.

We will assess the brief of evidence to consider the police case against you. If you decide to plead guilty to a charge of Setting Fire to an Aircraft, there is a lot of preparation that we will undertake to prepare for a plea hearing.

If appropriate, we will enter negotiations with the prosecution as to the alleged summary, aiming to resolve the case on the most favourable basis for you. We gather relevant material and work with you to understand the background to what has occurred.

This is a very serious offence which is heard in the County Court.

What is the legal definition of Setting Fire to Aircraft?

Any person who unlawfully and maliciously sets fire to or in any way destroys any aircraft whether complete or incomplete shall be guilty of an indictable offence.

Examples of Setting Fire to Aircraft

The legislation for this offence can be found on section 246B of Crimes Act 1958.


“Can they prove you set fire to an aircraft?”

Did the accused partly or completely destroy the aircraft in any way?
‘Destroy’ is not defined in the Act so the court will look to the common meaning of the word. According to Oxford dictionary, ‘destroy’ usually means to end the existence of something by damaging or attacking it.

However, the section specifies that it will be sufficient if the accused destroys the aircraft ‘in any way whether complete or incomplete’. Thus, if an accused simply damages the aircraft, this will likely be sufficient.

Is it an aircraft?
According to section 2A of the Crimes Act 1958, ‘aircraft’ means every type of machine or structure used or intended to be used for navigation of the air.

Notably, there is no requirement that the aircraft be in the air at the time when the accused sets fire to it or partly/completely destroys it.

Defences to this could include a factual dispute or lack of intent.

Maximum penalty for section 246B of the Crimes Act 1958

Any person convicted of Setting Fire to Aircraft (s246B of the Crimes Act 1958) may be sentenced to a maximum of 15 years imprisonment.