Possess More Fish Than the Catch Limit is found in section 68A(3)(b) of the Fisheries Act 1995. It is a criminal offence to have taken or have in their possession a species of fish in excess of the catch limit that applies to that species of fish.

Have you been accused of Possess More Fish Than the Catch Limit? 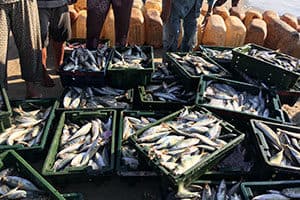 You will be interviewed if an investigator believes you have more than the catch limit of fish. An investigator is only interested in searching for information which will assist them compile a case against you. You must resist the urge to defend yourself to the investigator with the hope that they will leave you alone.

You should speak with one of our lawyers before you participate in an interview. One of our experienced lawyers can advise you on what to expect in their interview process so you are not caught off guard.

If you have been charged with possessing more fish than the catch limit, and dispute the allegation, contact one of our lawyers to discuss defending the charge. The authority that charges you may have got it wrong – we can help defend the allegations. Maybe they misidentified the species, or perhaps they miscounted. We will carefully consider your instructions and the evidence against you to devise a strong defence strategy.

If you were found in possession of more fish than the catch limit, contact our office so we can advise you on the charges, and what the likely outcome will be. We will spend time understanding why you broke the law so the court understands your side of the story, and sentences you with an understanding of you and why you did what you did. If you want to have a chance at achieving the best possible court outcome, you are best to call us to discuss your case. 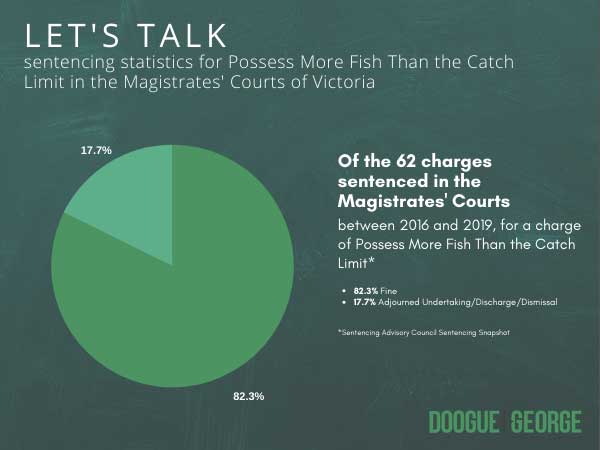 This charge is heard in the Magistrates’ Court.

What is the legal definition of Possess More Fish Than the Catch Limit?

Examples of Possess More Fish Than the Catch Limit

The prosecution must prove either of the following two elements for a person to be found guilty of this offence:

‘Take’ is defined in the Act as ‘gain possession or control by any means’.1 This will ordinarily mean catching the fish from the ocean or a body of fresh water and then taking possession of them. However, ‘take’ is defined broadly and could also include other means of gaining possession, for example receiving fish as a gift from another angler.

A ‘fish’ might be alive or dead, raw, cooked, preserved or processed in any matter whatsoever. A fish can be of either sex, ova or be part of a fish.3

‘Catch limit’ is defined in the Act as any limit imposed under the Act on the quantity or type of fish or fishing bait that may be taken, possessed or controlled in any specified circumstances.4 Catch limits for specific species of fish are available on the Victorian Fisheries Authority website.5

‘Possession’ is defined in the Act as follows:


Without limiting the meaning of “possess”, for the purposes of this Act a person possesses a fish or an item of fishing equipment if the fish or item is on any land or premises occupied by him or her, or is under the person’s control, unless the person can satisfy the relevant court to the contrary.”6
This means that if a fish is found on a premise the accused person is occupying or under the accused person’s control, it is assumed that the person is in possession of that fish. The onus is on the accused person to demonstrate that they were not in possession of the fish in these circumstances.

‘Fish’ and ‘catch limit’ have the same meaning as in Element 1 above.

Other important information for fishing

It is important to note that there are many regulations around the types of fish a person can take or be in possession of aside from maximum catch limits. For example, a person may not take or possess female Rock Lobster with eggs or remove eggs or take soft-shelled Rock Lobster.

Ensure that you check the Victorian Fisheries Authority website before and understand the appropriate regulations governing the relevant fish.

The relevant legislation for this offence is section 68A(3)(b) of the Fisheries Act 1995.

It is a defence to this charge if a person is found with excess of the catch limit for a certain fish and they can prove they were fishing for multiple days. This is because catch limits apply to any one day. For example, if Hannah is found with twelve Bream in her possession (catch limit is 10) but can prove she has been based in a caravan park and fishing for three days, she can successfully defend the charge.7

Another common defence to this charge is that the fish are not in the accused person’s possession.

As with any criminal offence, whether or not someone should plead guilty to this charge depends on the specific features of their case.

The Department of Treasury and Finance reviews and updates the value of a penalty unit on 1 July each year.8 As such, the maximum fine for this offence is liable to change.