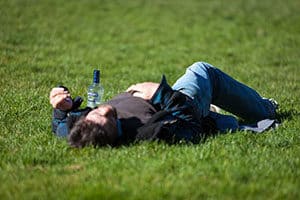 This charge is generally laid in situations where a person is found to be drunk and disorderly in a public place.

What are some of the possible defences to Persons Found Drunk and Disorderly?

Defences to this could be duress, a factual dispute, the concept of beyond reasonable doubt, honest and reasonable mistake of belief, wrongful identification, lack of intent, or mental impairment.

You should call us to discuss your case with one of our experienced lawyers. Deciding on whether to plead guilty or not has important implications for you and should be made after proper discussions with a criminal lawyer.

Maximum penalty and the court that deals with this charge

The offence of Persons Found Drunk and Disorderly is a summary offence heard in the Magistrates’ Court.

What is the legal definition of Persons Found Drunk and Disorderly?

A public road, street, passage, footpath or alley,
Any park, garden, reserve or other place of public recreation or resort,
Railway station platform or carriage,
Any wharf pier or jetty,
Any passenger ship,
Any public vehicle for hire,
Any church,
Government school,
Any public hall or theatre,
Any market,
Any auction room,
Any licensed premises, or
Any public sporting field.

The legislation for this offence can be found on section 14 of Summary Offences Act 1966.

In essence to prove this charge the Police must show that the accused was drunk and whilst drunk behaved in a disorderly manner in a public place.

“Can the Police prove you were drunk?”

From 1 July 2013 to 30 June 2016, there were 704 cases (742 charges) of Persons Found Drunk and Disorderly that were heard in the Victoria’s Magistrates’ Courts. Majority of these cases resulted in financial penalties (34.4%) but there were also many others that received other forms of sentencing: Community Correction Order (23.3%), adjourned undertaking/discharge/dismissal (23.0%), imprisonment (16.5%), wholly suspended sentence (1.9%), partially suspended sentence (0.6%), and Youth Justice Centre Order (0.4%).