Offences Against Court Security is found in section 4 of the Court Security Act 1980. It is a criminal offence for a person to possess a firearm, an explosive or an offensive weapon on Court property.

Have you been accused of Offences Against Court Security? You will have important legal questions that you would need answered by a skilled criminal defence lawyer. 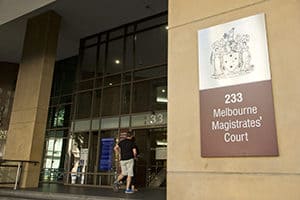 The police interview is not the time or place for you to explain our side of the story and hope that the matter will go away. Therefore, you must receive legal advice before speaking with the police even if it is calling our firm from the police station.

If police intend to interview you in relation to Offences Against Court Security, an experienced criminal lawyer will provide you with expert advice about whether you should exercise your right to silence, or whether it will ultimately assist your case if you answer all questions put to you by police.

If you are pleading not guilty, it is important to engage an expert criminal lawyer at an early stage of proceedings. Your lawyer will explain the process involved in contesting the charge at Court and will defend you from prosecutor’s allegations at each stage of the proceedings.

Our lawyers are proactive when representing people accused of crimes and in a case like this will:

If you have been caught committing Offences Against Court Security and you intend to plead guilty to the charge, it is still wise to seek legal advice and representation.

Navigating the Court process can be daunting and speaking on your own behalf can feel overwhelming. An experienced criminal lawyer will not only assist you to thoroughly prepare supporting materials for your plea of guilty, your lawyer will also speak at Court on your behalf and advocate for your best possible outcome. 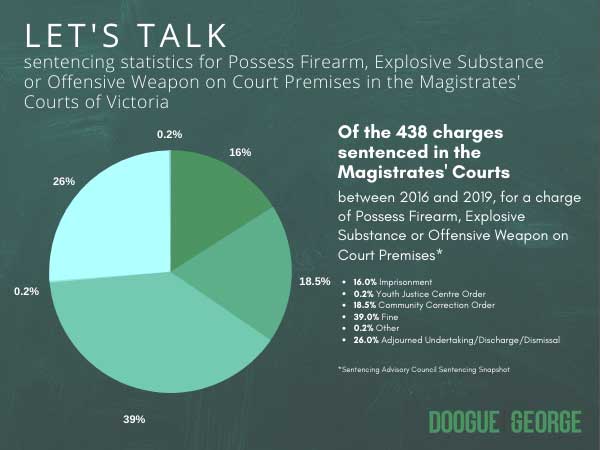 This offence is generally heard in the Magistrates’ Court.

What is the legal definition of the Offences Against Court Security?

A person who without lawful excuse carries or has in his possession on court premises a firearm or an explosive substance or an offensive weapon is guilty of an indictable offence.

Examples of the Offences Against Court Security

The legislation for this offence can be found in section 4 of Court Security Act 1980.

A person may have control of an item if they have it on them or within their reach (‘manual custody’) or if they have it in a location where they maintain the power to ‘place his (or her) hands on it and so have manual custody when he (or she) wishes’.2 For instance, if you are parked directly outside the court, and you have a firearm in the glovebox of your car, this will probably be sufficient to amount to ‘possession’ of the firearm.


“Can they prove you had a firearm, explosive substance or offensive weapon in your possession?”

2) Was the item a firearm, explosive substance or offensive weapon?
‘Firearm’ has the same meaning as in the Firearms Act 1996. ‘Firearm’ means any device, whether or not assembled or in parts:

‘Offensive weapon’ means any article made or adapted for use for causing injury to or incapacitating a person, or intended by the person having it with him for such use.6

This is a very broad definition. You do not have to be inside a courtroom or even inside the court foyer to commit this offence. You can commit this offence if you are in the car park adjacent to the court building or standing on the court steps, or in any area in the immediate vicinity of the court.

To avoid committing an offence under section 4, it is wise not to bring a firearm, explosive substance or offensive weapon anywhere near a court building.

4) Did you have a lawful excuse?
Whether or not you had a lawful excuse will depend on the circumstances. For example, if you a police officer and you are permitted to carry a firearm as part of your job, this will amount to a ‘lawful excuse’ to possess a firearm on court premises.

Defences to this could be a factual dispute, wrongful identification, the concept of beyond reasonable doubt, or lack of intent.

Maximum penalty for section 4 of the Court Security Act 1980

It is the type of offence that will be viewed seriously by the Court. In Law 21/3/1988 CCA Vic, the Court stated that the purpose of the Court Security Act 1980 ‘was to deter and, if not to deter, to punish’.7