It is compulsory for all eligible Australians (18 years and over) to vote in federal and state elections. Failure to vote at an election is an offence under section 166(1)(a) of the Electoral Act 2002. As this offence only carries a maximum penalty of one penalty unit (around $161), you would only hire a lawyer to contest this charge if you wish to fight it as a matter of principle. 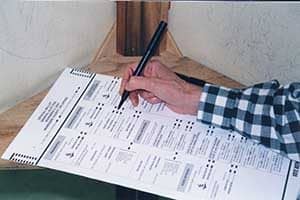 Cases related to this offence will be heard at the Magistrates’ Court.

Element 1: Was the accused eligible to vote?
In order to be eligible to vote, the accused must be an Australian citizen and over the age of 18. The following Australians are not entitled to enrol and vote: people who are incapable of understanding the nature and significance of enrolment and voting, prisoners serving a sentence of five years or longer, and people who have been convicted of treason.

Australians can also qualify for special enrolment in certain circumstances:

Element 2: Was an election held?
This is usually not a controversial element. It would obviously be a defence to the charge if no election was held.

Element 3: Was a vote registered on behalf of the accused?
Again, this is usually not a controversial element. It is possible that the accused registered their vote but their name wasn’t crossed off by the staff working at the polling booths.

In Judd v McKeon (1926) 38 CLR 380, the High Court gave some practical examples of what would be regarded as sufficient reasons for not voting:


“Physical obstruction, whether of sickness or outside prevention, or of natural events, or accident of any kind, would certainly be recognised by law in such a case. One might also imagine cases where an intending voter on his way to the poll was diverted to save life, or to prevent crime, or to assist at some great disaster, such as a fire: in all of which cases, in my opinion, the law would recognise the competitive claims of public duty.”1

The legislation for this offence can be found in section 166(1) of the Electoral Act 2002.

Cases involving this charge are often defended on the basis of sudden or extraordinary emergency, impossibility (i.e. physical obstruction such as a natural event or accident of any kind) and mental impairment. We successfully defended one of these on the basis that the client turned up at the advertised polling booth to find that it was not open.

Whether you should contest or plead guilty to this charge depends on a lot of factors but a charge such as this would only be fought in Court on a matter of principle as the penalty is so low. You would not want to pay legal fees that amount to more than the fine.