Home » Breach of a Suspended Sentence

Breach of a Suspended Sentence

This State offence was abolished a number of years ago.

This excludes the possibility of restoration of the original sentence to be immediately served by the defendant.

This charge is one of the most serious forms of criminal offending. Since it involves a suspended sentence, it means that the defendant was already found guilty of a previous offence, received a suspended sentence of imprisonment as a penalty, and was still serving it at the time when the breach was committed. 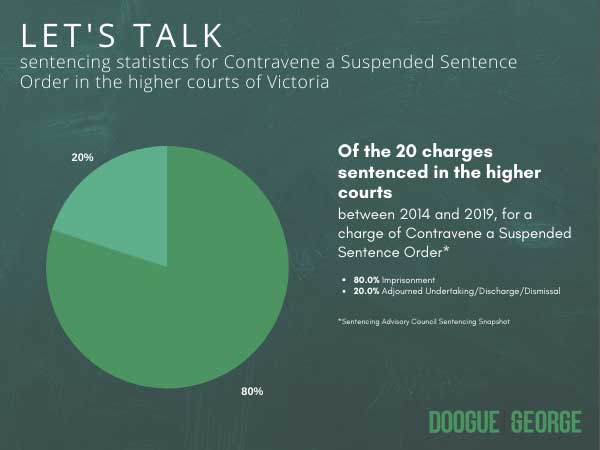 In a case of Breach of Suspended Sentence, the following defences may be applicable to the charge:

Defences to this charge often revolve around a factual dispute. Depending on the circumstances, criminal lawyers may consider other applicable defences.

Whether you should plead guilty or not to this charge is something that can best be evaluated by a criminal lawyer. If you are found guilty, there could be severe consequences.

What penalties can be imposed for a charge of Breach of Suspended Sentence?

The legislation for this offence can be found on section 83A8 of Sentencing Act 1991.

For the Prosecution to establish this charge, the defendant must primarily be under a lawful suspended sentence. The Court must have found the defendant guilty of another offence punishable by imprisonment. This offence should have been committed during the period of the suspended sentence, and the proceeding should be commenced within 3 years of the breaching offence.

Links to further information about the charge of Breach of Suspended Sentence:

< Back to Breach Offences
< Back to A -Z of Offences