The offence of Arson is found in section 197 of the Crimes Act 1958 in Victoria. It is committed by a person who intentionally and without lawful excuse destroyed or damaged another person’s property by use of fire.

Have you been accused of Arson? Contact an arson lawyer immediately for expert legal advice.

The best thing you can do for your case is to gather as much information as possible about your rights and obligations before attending a police interview in relation to an allegation of Arson. Understanding the process by talking to one of our lawyers can only help you improve your situation and know what to expect.

Call our office for initial advice and ask about an arson lawyer attending the interview with you.

Pleading not guilty to a charge of Arson means you are taking the matter to trial. If you deny that you committed Arson then in most cases, you will be pleading not guilty before the Court. Before electing to take your matter to trial, you should get an advice from your lawyer about the potential legal issues that you were not aware of or had not considered. Arson is a complex charge which requires careful thought. There will be a lot of evidence to decipher.

To ensure you are armed with everything you need to defend your case against an allegation of Arson, it is essential that you consult a lawyer. At Doogue + George Defence Lawyers, we will carefully consider the evidence compiled by police, obtain detailed instructions from you and provide you with advice about your best strategy to defend the charge in front of a jury.

It is essential that you get advice from a lawyer before making the decision to plead guilty to a charge of Arson because the consequence could be prison. At Doogue + George Defence Lawyers, we will review the brief to ensure you are making the right decision and negotiate the summary of agreed facts. We will also appear in Court for you and persuade the Judge to impose a penalty which is fair having regard to your personal and psychological circumstances. 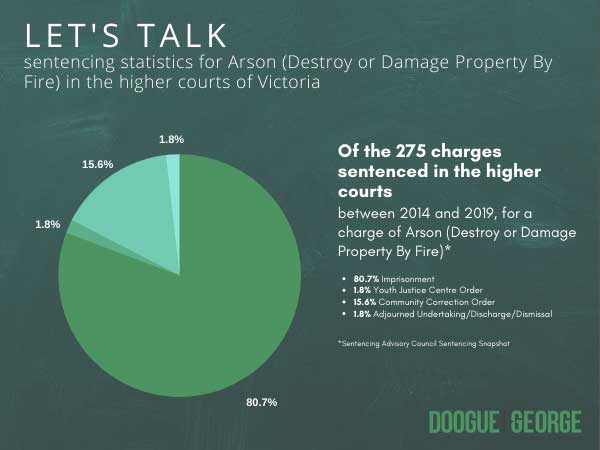 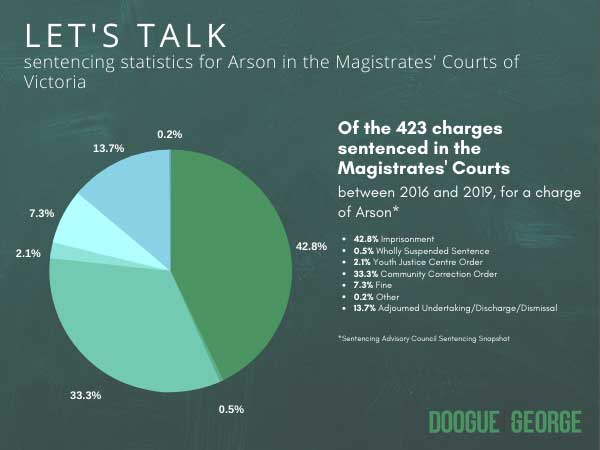 For an accused person to be found guilty of arson, the prosecution must establish all six elements of the offence beyond a reasonable doubt. This means that if the prosecution is unable to establish any one of the above six elements, then arson definition is not satisfied and an accused person will be not guilty of the offence. As a result, there are many offence-specific defences such as:

There are also more generic defences available that can be used by an arson lawyer to defend against the charge, such as mistaken identity. Can the prosecution prove that it was the accused who did the relevant act and not someone else? Are the prosecution witnesses credible and reliable?

Arson (s197 of the Crimes Act 1958) by its very definition is a serious offence. It is punishable by 10 years imprisonment. Arson is an indictable offence which means that it may be heard in the County Court. Arson can also be tried summarily in the Magistrates’ Court if the property that was destroyed or damaged does not in the judgement of the Court exceed $100,000.

Key sentencing considerations
The most important offence-specific sentencing considerations are the extent and value of the damage or destruction caused; the risk caused by the offender’s conduct; the method used to cause damage or destruction; the degree of planning involved; the offender’s purpose; the type of property damaged; and the drain caused on public resources.

Arson is made an offence by section 197 of the Crimes Act 1958 (Vic) (“the CA”). Section 197 of the CA makes it an offence to intentionally and without lawful excuse destroy or damage another person’s property. If fire is not used to damage or destroy the other person’s property then the police will charge an offender with ‘criminal damage’. This offence covers a range of acts including, for example, causing damage to someone’s car by kicking it or throwing a rock through someone’s house window. If fire is used to damage or destroy the property, then the offender will be charged with arson pursuant to s 197(6) of the CA. However, both ‘criminal damage’ and ‘arson’ have the same maximum penalty (10 years imprisonment).

The elements of the offence

In order to prove a charge of arson, the prosecution must prove each of the following six elements beyond a reasonable doubt:

If the prosecution is unable to establish each of the prescribed elements beyond a reasonable doubt, an accused person is not guilty. This means that if the prosecution is unable to establish any one of the above six elements an accused person should be found not guilty. These elements are necessary to satisfy the meaning of arson in court. The job of our arson lawyer is to determine whether you have a defence to any of those six elements and then to present that defence in court.

What is property?
‘Property’ in a case of arson is defined in s 196 of the CA and means real or personal property of a tangible nature. Section 196 specifically states the following things are considered property for the purposes of arson: money; wild creatures which have been tamed or are ordinarily domesticated; other wild creatures or their carcasses that have been reduced into possession or are in the course of being reduced into possession.

What do ‘destroy’ and ‘damage’ mean?
Neither ‘destroy’ nor ‘damage’ are defined in the CA. ‘Destroy’ has come to mean, through the common law, an action rendering property useless for the purpose for which it exists. ‘Damage’ has come to mean the permanent or temporary reduction of functionality, utility or value of property.

Element 2: The property belonged to another

This element requires the property to either have belonged to another person, or to the accused and another person. Property belongs to another person where that person had a custody or control of it, a proprietary interest in it, or a charge on it. It is possible for the accused to commit an offence by damaging or destroying property that he or she co-owns with someone else.

Pursuant to s 197(4) of the CA, arson definition applies to a person who has destroyed or damaged property only if either: his or her purposes or one of his or her purposes is to destroy or damage property; or he knows or believes that his conduct is more likely than not to result in destruction of or damage to property.

These two additional elements are what sets arson apart from ‘criminal damage’.

Element 6: The accused did not have a lawful excuse for his or her actions

The prosecution must also prove that the accused acted without lawful excuse. Some available lawful excuses are listed in s 201 of the CA and include:

These excuses must only have been honestly held by the accused at the time that the accused damaged or destroyed the property and the accused’s belief does not need to have been correct or justified.

The common law defences of self-defence and consent are also considered lawful excuses.

Check out some of the criminal cases we’ve defended in court that involve the offence of arson: