The article How Sentencing Actually Works Versus How the Public Think Judges Get It Wrong is written by Dee Giannopoulos, Senior Associate, Doogue + George Defence Lawyers.

Dee is a solicitor advocate based at our Melbourne office. She is an expert in pre-charge strategies as well as in matters involving significant amount of infringements.

Dee's excellence in the field has led to many of her clients being interviewed but not charged. She is recognised as a Rising Star Criminal Defence Lawyer in the Doyle’s Guide 2020 and is a member of the Young Lawyers Section of the Law Institute of Victoria. 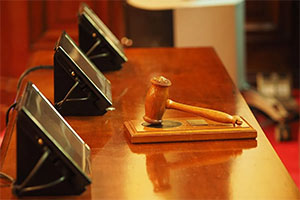 Generally, the police or the Director of Public Prosecutions are responsible for determining what criminal charges a person will face based on available evidence.

Statistics suggest that most people who are charged with criminal offences plead guilty. However, should the accused choose to contest the charge(s), they will either face a hearing before a Magistrate, a trial before a judge and jury, or a judge (sitting alone) to decide if they are guilty or not guilty.

When an accused person comes before the Magistrates’ Court for a summary charge or an indictable charge capable of being heard and determined summarily, sentence is usually passed on the same day as the finding of guilt.

The length of sentence given to a person found guilty in the County Court is usually higher than that of the Magistrates’ Court, which has a maximum of two years for a single offence and five years for multiple offences.1

The Supreme Court hears the most serious of all criminal offending including terrorism, treason, murder and attempted murder and in the case of civil charges, matters involving complex legal issues and claims in relation to substantial amounts of money.

The instinctive synthesis of the sentencing discretion is the term used to describe what is taken into account by a Magistrate or Judge at the time of passing sentence. It involves the Magistrate or Judge identifying all matters required to enable them to assess what would be an appropriate sentence in all the circumstances.

When determining a sentence, a Magistrate or Judge considers five main aspects. These are just punishment, rehabilitation, deterrence, denunciation and community protection.2

Prior to a Magistrate or Judge making a determination as to the appropriate sentence in a case, both prosecution and defence counsel present information to the Judge at a plea hearing with an indication of where the offending sits on the sentencing scale. This indication is not binding on the Magistrate or Judge.

Section 5(2) of the Sentencing Act 1991 explains the matters considered when sentencing an adult. These include:

Matters which may also be considered include:

How The Public Think Judges Get It Wrong

Studies suggest that the general public think that sentences are too lenient.

What does ‘get it wrong’ mean? Was the sentence too harsh or was it too soft?

Well, this appears to depend on that very human characteristic called emotion.

Which takes us to the question of wherein lies the truth? Well, history tends to show that in the vast majority of cases, judges and juries get it right.

This is in no small part due to the Sentencing Advisory Councils or their equivalent, which exist in most Australian states and indeed most countries. Their job is to dispassionately, comprehensively and expertly analyze research. This assists the courts to ultimately impose a just punishment and to act in the interests of justice.