Home » Practice and Procedure » Getting Charges Withdrawn in the Magistrates’ Court

Getting Charges Withdrawn in the Magistrates’ Court

The article Getting Charges Withdrawn in the Magistrates’ Court is written by Annamiek Van Loon, Associate, Doogue + George Defence Lawyers. 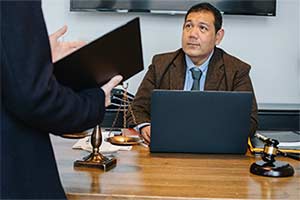 Having charges dropped doesn’t just happen in the movies. There are several ways to have your charges withdrawn which might result your case being over entirely.

The only way to have charges withdrawn is by the prosecution, police prosecutors who handle criminal matters at the Magistrates’ Court or the Office of Public Prosecutions if your matter is listed in the County or Supreme Courts. As it is their case, it is up to them which charges they pursue and withdraw based on the evidence and the negotiations with the accused person’s defence lawyer. Prosecutors have a broad discretion and each brief must be conferenced with the prosecution prior to Court.

If you engage a criminal defence lawyer, they will know which charges to try to withdraw based on your instructions and their expertise.

Getting charges withdrawn is never a black and white exercise – like everyone, different prosecutors have different opinions, priorities and attitudes towards cases they have conduct of. What you achieve will vary from case to case, court to court, prosecutor to prosecutor.

Here are some of the ways you can get charges dropped –

When a police officer charges someone, they often lay a variety of charges in relation to the one incident / action. For example, if someone is violent towards another, they will likely be charged with intentionally cause injury, recklessly cause injury and unlawful assault. The police officer that charged the accused doesn’t intend for all three charges to proceed, they are leaving it up to the defence lawyer and prosecution to work out which is the most appropriate charge, if any.

Another example is drug related offending. If you get caught with a large amount of drugs, the police will likely charge you with trafficking and drug possession. These are alternative charges and the prosecution will offer to withdraw one of them.

My client was charged with kicking and hitting his partner, and he was shocked to be charged with three charges alleging violence: intentionally cause injury, recklessly cause injury and unlawful assault. He agreed that he kicked and hit her. Whilst his partner sustained some light bruising and was extremely scared and upset by the incident, she did not sustain any injuries. Accordingly I was able to negotiate with the prosecution that the two injury charges be withdrawn and my client pleaded guilty to unlawful assault, the least serious charge in the mix.

2. Lack of or inconsistent evidence

If your lawyer thinks the police do not have enough evidence or the police witnesses have provided varying accounts, they can urge the prosecution to withdraw the charges. This happens frequently and is a very normal part of the criminal case process. When someone is charged, a brief of evidence is prepared by the informant containing all the evidence they rely on to prove their case. CCTV can be blurry, statements can be problematic, photos can be undated or defence might have evidence that disproves the police case. The prosecution must consider if they can prove a charge. If they can’t, they should withdraw the charge.

My client was charged with unlawful assault following a domestic dispute with his girlfriend during lockdown. She told police her version of events and they charged him. His girlfriend had CCTV installed in the living area where the incident took place which captured the entire incident and showed a very different version of events. I was able to send the clip to the prosecution, highlighting the inconsistencies and they agreed to withdraw the charge. This meant my client’s case was over and he didn’t have to worry about this charge anymore.

A client of mine was a victim of domestic violence for 18 months at the hands of her ex-boyfriend. When she built the courage to break up with him, he reported her to the police for allegedly damaging his property and sending abusive messages to him after she was served with an order that prohibited her from messaging him. The police conceded they couldn’t prove she damaged he ex’s property, but they had screenshots of the text messages. My client had no priors, had never been in trouble before, and this charge proceeding posed a threat to her current and future employment. I was able to highlight to the prosecution the reality of the situation and asked that they not pursue that charge on a public interest basis. They agreed and withdrew the matter so my client did not get a criminal record and wasn’t further impacted by her ex-boyfriend’s abusive behaviour.

Sometimes the police are called to an argument at home, and what seemed like a normal private domestic argument leads to someone being charged with criminal offences. There can be a very fine line and this is appreciated by police prosecutors. If someone is charged in relation to a domestic incident and the allegations are not serious in nature, an experienced lawyer can put together a comprehensive email requesting a family violence case review and ask that they not pursue the charge based on this review.

I had a client who was charged with criminal damage and unlawful assault following a domestic dispute between him and his wife over what TV show they should watch. I explained to the prosecution that the assault was not intentional as the couple were both fighting over the remote control, and my client out of frustration knocked a pot plant off a shelf which caused it to smash. I highlighted to the prosecution that this was a domestic fight, the couple were still together, there had never been any violence, and my client had never been in trouble before. I asked them to conduct a family law case review and a few days later they agreed to withdraw the charges.

Sometimes in order for a matter to settle, the prosecution might offer to withdraw some charges on the basis that other ones are pleaded to. This decision isn’t made lightly. For example, if there is strong evidence for a charge, you can expect that the prosecution will be pursuing it. It is a juggling act and competing factors are considered to inform the prosecutor’s decision. Sometimes both parties need to come to the table with a genuine desire to settle a matter and sometimes certain charges being withdrawn achieves settlement so everyone is happy.

6. Issue with the charge itself

Were you charged within the required statutory timeframe? Did the informant complete the charge paperwork correctly including proper filing and service? For many offences, police only have 12 months from the date of the offence to charge someone. The rules police must follow when charging someone are important and an experienced criminal defence lawyer will always check whether the charges against their client were laid in accordance with the law. If a charge was laid out of time, it cannot proceed and must be withdrawn by the prosecution.

So many factors must be considered when thinking about whether charges can and should be withdrawn. Rarely is this exercise black and white, and what you might achieve with one prosecutor you won’t with another.

If you are charged, your best bet is to call an experienced criminal lawyer straight away so you can start strategising with them to determine if there is scope for some or all of your charges to be withdrawn.