Home » Practice and Procedure » Citizen’s Arrest: What is It? When is It Applicable?

Citizen’s Arrest: What is It? When is It Applicable?

The article Citizen’s Arrest: What is It? When is It Applicable? is written by Ophelia Hollway, Lawyer, Doogue + George Defence Lawyers. 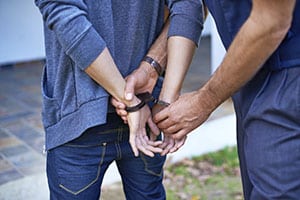 A citizen’s arrest can be made when a member of the public witnesses a crime occurring and no police officer is available to apprehend the offender.

The beginning of what is known as a citizen’s arrest is said to have commenced in medieval England, where members of the community were encouraged by the authorities to detain alleged offenders.

Other sources however claim this concept began in America during the Civil War.

In England, citizens of England were permitted to effect a citizen’s arrest. Subsequently, it became simply residents and now that is how it is generally accepted.

In England and Wales, the term ‘citizen’s arrest’ was replaced with what is called an ‘any person arrest’, which is governed by section 24A (2) of the Police and Criminal Evidence Act 1984.

In Scotland, citizen’s arrest does not exist in ‘Scots Law’ but a person detected committing a serious criminal act may be ‘arrested’ by a member of the community.

In Northern Ireland, the term used varies from citizen’s arrest to ‘arrest without a warrant’.

In the rest of the world, including Hong Kong, China and Russia, the term varies though means the same thing. Some countries permit an arrest only in circumstances where the criminal act is considered serious.

How to Make a Citizen’s Arrest in Victoria

Not all persons subject to a citizen’s arrest are charged and/or convicted.

When this occurs, it is possible that the person who made the arrest can face criminal charges, including ‘false imprisonment’, ‘unlawful arrest’, ‘assault’ and be open to a claim for ,em>damages in a Civil Court.

Indeed, in recent years there have been cases of individuals making citizen’s arrests who have later come before the courts themselves on charges including murder. In two Victorian case, one in Frankston and the other in Heathcote, the alleged offenders died in the course of the citizen’s arrests.

There have also been examples of people effecting citizen’s arrests being seriously injured or murdered.

Major studies indicate that the vast majority of police forces, worldwide, discourage members of the public from intervening to make such an arrest.

However, it is clear from other studies, that the bravery of many members of society has been instrumental in saving countless lives. This has been most obvious in terrorist incidents.

An interesting feature of the legislation is that even police officers are subject to a citizen’s arrest.

A recent and controversial attempt to amend current legislation in relation to ‘citizen’s arrest provisions’ in the Crimes Act 1958 (Vic) was attempted by the State Government.

Essentially, what was proposed in the COVID-19 Omnibus (Emergency Measures) and Other Acts Amendment Bill 2020, was to allow members of the public, under the guise of being designated ‘authorised officers’, to arrest and detain people suffering from COVID-19 and those persons with whom they had been in close contact.

As a result of public outcry, this part of the Act was not passed.

Citizen’s arrest should not be done without consideration. The fundamental message is that the person making the arrest must have witnessed the offending.