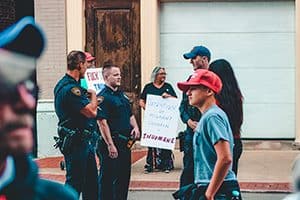 Written by Amelia Ramsay, Associate, Doogue + George Defence Lawyers
Videoing Police
It is hard to find the words to describe the footage of George Floyd. It is the same way I feel about the footage of the officers on top of David Dungay Junior and the footage of Tanya Day in a police cell. I feel so sad it makes me sick. I feel angry and guilty. Guilty because I’m white and I’m privileged, and my feelings are actually irrelevant because they are nothing in comparison to the feelings of those who experience racism. Unfortunately, this video footage is important. It is critical to raising awareness and exposing discriminatory and violent policing. It might also mean more convictions of police officers accused of excessive use of force. Body cameras only go so far and rely on police officers to use them appropriately. Documenting through public video is how police will be held accountable.

On Monday afternoon this week, a 16-year-old Aboriginal boy was videoed as he was thrown to the ground by a NSW police officer who kicked the boy’s feet out from underneath him. The footage was taken by the boy’s friends and it went viral when it was posted online. The NSW Police Commissioner, Mick Fuller went on 2GB and said that the officer, “had a bad day”. Police officers capable of a bad day that causes them to take their anger out on 16-year-old boys should not be police officers. Police officers like that must be held accountable. And by accountable, I do not mean through an internal police investigation conducted by other police members, I mean held accountable by an independent body and by the public, the community that puts its trust in them.

In the Northern Territory recently, Former Senior Constable Raymond Neilson-Scott was convicted of assaulting three people while responding to reports of a domestic violence incident. Neilson-Scott was wearing a bodycam and the footage was used in Court. Judge Armitage said, “I found the defendant’s evidence changed over time, was internally inconsistent, was inconsistent with the BWV [body-worn vision] and was, at times, exaggerated.” All of that from someone who had been in the police force for more than 10 years. Perhaps Neilson-Scott also had a bad day.

In November 2019, the events in Yeundumu leading up to Kumanjayi Walker’s death were caught on body camera. We are still waiting to see how this horrific and familiar narrative will play out. Constable Zachary Rolfe has been charged with murder and pleaded not guilty.

So in the interest of holding police accountable, keep videoing.

Yes, you are allowed to video police and yes, it can be helpful in Court. Here are some things you need to know:-

If you are in a public place, the police are not allowed to take your phone or camera from you unless you consent to it. They also cannot prevent you from taking photographs or videoing police officers, operations or incidents and they cannot confiscate your phone or camera or delete images or recordings or tell you to do the same.

The only circumstances in which a police officer can confiscate your phone are:-

If a police officer directs you to “move-on” you should do so. It is an offence to interfere with police or hinder them from carrying out an arrest. If you get this direction or you are told to step back, it is probably a good idea to do so to avoid getting arrested yourself. You can keep videoing from further away. Another important thing to consider is streaming the video live so that even if the phone is taken the footage is already out there.
The most important thing is that you video safely and legally. And if you are protesting this weekend, do it peacefully.