In Victoria, Using Firearms to Resist Arrest is found in section 29 of the Crimes Act 1958. It is a criminal offence that is committed by a person who resisted arrest whilst using a firearm or imitation firearm.

Have you been accused of Using Firearms to Resist Arrest? 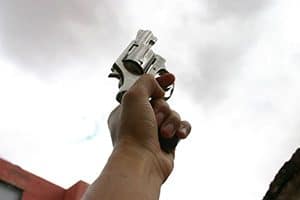 Using a firearm to resist arrest is a serious offence. If you are arrested for this offence or called in to a police station for interview, it is important that you call us first to get legal advice. We can assist you in preparing for your interview which can be used as evidence that forms part of the case against you.

It is worth noting that police officers are experienced in asking questions in a way to make it seem that you are not telling the truth. It is also worth noting that there is no such thing as an “off the record” discussion. The police will use anything they think is helpful to their case. Therefore, it is best that you are advised how to handle the interview.

Preparing a well planned and investigated defence is essential when pleading not guilty to using a firearm to resist arrest. There may be evidence which needs to be collected that police have over-looked which can help your defence.

Our lawyers regularly appear in contested hearings for this offence and can assist you in obtaining the necessary material to fight your case. Our firm is unique in that we have in-house barristers who run our contested hearings and trials. One of our in-house counsel can get involved in your case from the very beginning of you coming to our firm and preparing a defence strategy.

If you decide to plead guilty to Using Firearms to Resist Arrest, It is important to present the court with all the relevant material about you and your circumstances. We pride ourselves in our skills in plea preparation and can assist you in obtaining a favourable outcome. Our experienced defence lawyers can assist you in:

All of these things are essential to well-prepared plea in mitigation.

As this is a strictly indictable offence, it will only be heard in the County Court.

What is the legal definition of Using Firearms to Resist Arrest?

A ‘firearm’ is defined by the Firearms Act 1996 as a barrel, breech, pistol slide, frame, receiver, cylinder, trigger mechanism, operating mechanism or magazine designed as, or reasonably capable of forming, part of a firearm.

Section 29(3)(b) of the Crimes Act defines an ‘imitation firearm’ anything which has the appearance of being a firearm whether or not it is capable of discharging any shot or other missile.

The legislation for this offence can be found on section 29 of Crimes Act 1958.

To prove this charge, the Prosecution must demonstrate the following elements, beyond reasonable doubt:


“Can the Prosecution prove that you possessed a firearm?”

If you have been charged with this offence, you may rely on the following defences:

If you have been charged with this offence, you should call us to discuss your case with one of our lawyers. Deciding on whether to plead guilty or not has huge consequences for you and should be made after proper discussion with a criminal lawyer.

Maximum penalty for section 29 of the Crimes Act 1958