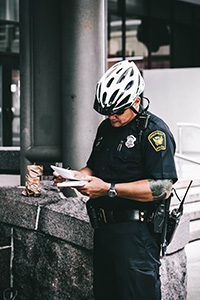 This section is used to prosecute a person who provides a false address in response to a request made by a police officer who believes on reasonable grounds that the person has:

Providing a false address in the circumstances listed above is an offence pursuant to section 456AA(3)(c) of the Crimes Act 1958.

What are some of the possible defences to State False Address When Requested?

If you have been charged with providing Police a false address, you may rely on one of the following defences:

The circumstances of the case must be carefully considered to decide an appropriate defence.

This offence carries a fine of 5 penalty units (around $700) as the highest possible sentence. This offence is heard at the Magistrates’ Courts.

What is the legal definition of State False Address When Requested?

The Police officer requesting your address must inform you of the grounds for his or her belief in sufficient detail so that you understand the nature of the offence you are alleged to have committed or suspected of committing.

If a Police officer asks you to provide your address, you may ask them for their rank and Victoria Police number (badge number).

“Did the Police officer sufficiently explain to you why he/she requested your address?”

In the Magistrates’ Courts, 380 cases (395 charges) of the exact charge of State False Address When Requested were heard in a period of years from 1 July 2013 to 30 June 2016. These cases resulted in the following sentences: