Possess Drug of Dependence is an offence under section 73 of the Drugs, Poisons and Controlled Substances Act 1981. If you have been charged with this offence, we can help you.

The police may want to question you if you have been charged with possession of a drug of dependence. You understandably might be nervous about talking to the police or be wondering if you need to talk to them at all. We can give you advice about your options in relation to the police interview and answer any queries you have about the process. 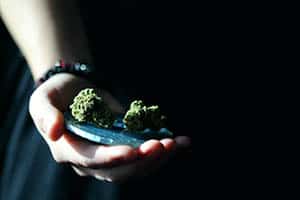 We have an intimate knowledge of what can be defined as a drug of dependence. You may think you have been wrongly charged and need some further advice. We can assist you with this charge and answer questions such as:

If you decide to plead guilty to this charge, we can assist you. We deal with this offence on a regular basis and can put together a plea that puts your best case forward. For example, if you have previously had a problem with drug addiction but have worked hard to overcome it, we can put that material into a plea. 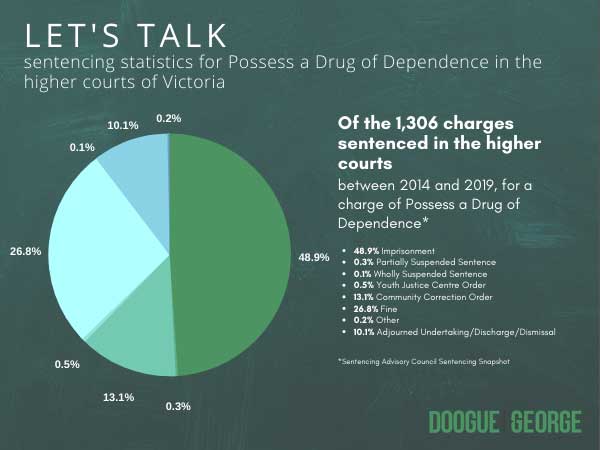 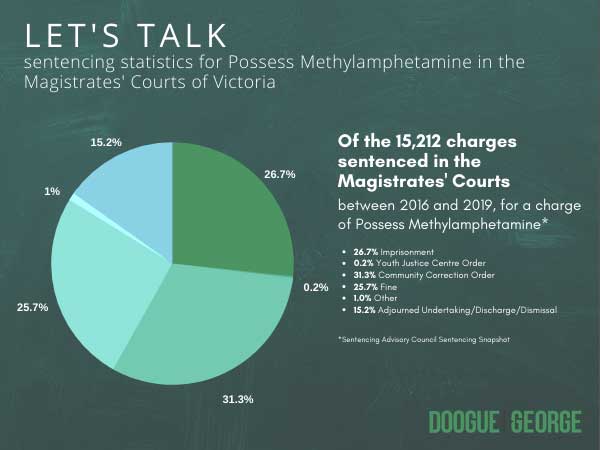 This charge is usually dealt with in the Magistrates’ Court.

Examples of Possess Drug of Dependence

What is the legal definition of Possess Drug of Dependence?

Drug of Dependence
Section 4 of the Drugs, Poisons and Controlled Substances Act 1981 (‘DPCSA’) defines a drug of dependence as a natural or synthetic drug listed in Schedule 11 to the Act.

Possession
There are three ways the prosecution can prove that an accused possessed a drug of dependence:

Possess drug of dependence is an offence under section 73 of the DPCSA.

We will look at each element in detail:

That the substance in question was a drug of dependence

Section 4 of the Drugs Act outlines substances which are said to be a drug of dependence. This includes:

View Schedule 11 of the Drugs Act.

Further, unusable portions of a drug (such as the stems, roots and stalks of the cannabis plant) are still considered to be drugs of dependence, so long as they fit within the definition specified by section 4.1

That the accused possessed that substance

The Prosecution can prove Possess Drug of Dependence for the purposes of this element by relying on the common law definition of possession. Common law possession involves the physical control with an intent to possess the drug allegedly possessed.

This requires the Prosecution to prove that a drug of dependence was in the Accused possession or physical in their control. A person does not need to be carrying the drug on their person to satisfy this element. They do however have to have custody or control over it. It is not uncommon for substances to be found in a person’s room whilst a warrant is executed for unrelated matters or even in a person’s car. In the first instance, a bedroom is a location where a person has manual custody and in the second, the substance is within reach of the Accused. This is said to be in their custody and within their control.


“Was the drug in your custody or control?”

In determining the mental element required, an inference can be drawn from all of the evidence available as to the Accused ’s intention.

Intention can be shown in variety of ways including admission by the Accused. It is also possible to infer an intention to possess a drug of dependence from proof that the accused knew of the existence and nature of the substance possessed. Awareness that there is real chance that a prohibited substance was possessed can satisfy the mental element required.

Often defences revolve around the issue of intent as to whether the accused intended to possess the drug in question. There are also often factual disputes about the circumstances in which the drugs were possessed. Other defences available include factual dispute, duress, wrongful identification, mental impairment, honest and reasonable mistake or belief or necessity may apply.

Maximum penalty for section 73 of the Drugs, Poisons and Controlled Substances Act 1981

The maximum penalty for Possess Drug of Dependence (s73 of the Drugs, Poisons and Controlled Substances Act 1981) is a fine of up to 30 penalty units (around $5,000) or 1 year imprisonment.

Check out some of the criminal cases we’ve defended in court involving the charge of Possess Drug of Dependence: