It is an offence in Victoria to Possess, Use or Carry an Unregistered Handgun under s 7B of the Firearms Act. This charge is unusual in that if you have been charged more than once, the maximum penalty increases. The maximum penalty can also be higher depending on the type of handgun police have charged you with possessing.

If you have been charged with this offence, we can assist you. It is important to get legal representation due to the risk of imprisonment on this charge.

Police will want to interview you in relation to this charge. It is important to seek legal advice before engaging in an interview and discussing the pros and cons of providing police with any information. We regularly advise clients on how to approach police interviews and, where relevant, can advise you on where it may be beneficial to provide some information to police. If you think this applies to you, get in touch with one of our lawyers today.

If you believe you have been incorrectly charged with this offence then you should seek legal advice as soon as possible on what your options are. We regularly provide detailed analysis to our clients on how to contest charges and can assist you if that is what you require. 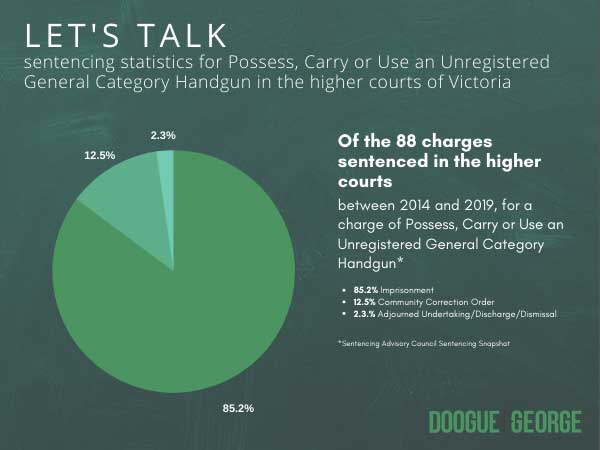 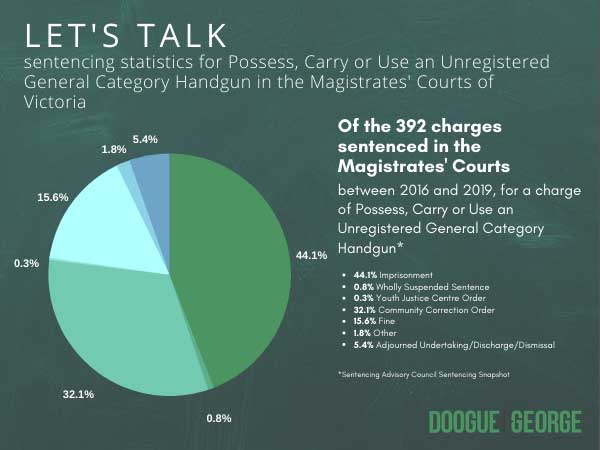 These are indictable offences, but they can be heard summarily, which means they are often heard in the Magistrates’ Court.

Examples of Possessing, Using, or Carrying an Unregistered Handgun

What is the legal definition of Possessing, Using, or Carrying an Unregistered Handgun?

A person must not possess, carry or use a general category handgun that is not registered, including a category E handgun.

The relevant legislation for this offence is section 7B of the Firearms Act 1996.

The accused possessed a handgun
Possession is not defined in the Act and takes the form of the common law definition. Common law possession involves the physical control with an intent to possess.


The conduct element
This requires the Prosecution to prove that the handgun was in the Accused’s possession or physically in their control.1 A person does not need to be carrying the material on their person to satisfy this element. They do however have to have custody or control over it. It is not uncommon for a hand gun to be forgotten about and found to be in a person’s room or garage whilst a warrant is executed for unrelated matter. In the first instance, a bedroom is a location where a person has manual custody. Once a person has possession of an item, that possession remains alive until the item possessed is disposed of. This is said to be in their custody and within their control.2
The mental element
In determining whether or not the accused intended to possess a handgun, a jury or Magistrate, depending on the circumstances, will need to decide if they can draw an inference from all of the evidence in the case that the accused had this intention.The prosecution does not need to prove that the accused intended to possess the particular hand gun in question. The intention may be general and a person may be in possession of a thing without necessarily knowing the nature of the thing, but it is essential that there at least be an intent to possess the thing irrespective of its nature.3

Further, intention can be shown in a variety of ways including admission by the Accused. It is also possible to infer an intention to possess a handgun from proof that the accused knew of the existence and nature of the item possessed.4
In terms of carrying or use of an unregistered handgun, possession is an easier element to satisfy (as with all gun possession charges) on the basis that the item is physically on the person.


“Was your handgun registered?”

A defence to this may arise where an accused had the weapon for the purposes of self-defence. Other defences include lack of intention to possess the firearm or that no possession actually occurred, honest and reasonable mistake of belief, necessity, duress, wrongful identification, sudden or extraordinary emergency and incorrect factual matrix.

Maximum penalty for section 7B of the Firearms Act 1996

For a first offence of Possessing, Using, or Carrying an Unregistered Handgun (section 7B of the Firearms Act 1996), the maximum penalty is 600 penalty units or 7 years imprisonment.

For a second or subsequent offence, the maximum penalty is 1200 penalty units or 10 years imprisonment.5