In Victoria, the offence of Intentionally Cause Serious Injury is in section 16 of the Crimes Act 1958 Vic and is where you have deliberately caused other serious injuries. This can be a combination of injuries.

Has the Police accused you of Intentionally Cause Serious Injury? Our experienced criminal defence lawyers can arrange a confidential conference with you to answer your important questions.

We are criminal lawyers who specialise in criminal defence work and have represented many people charged with Intentionally Cause Serious Injury.

It is important that you speak with one of our lawyers before you speak with the Police. Anything you tell the Police can be used in evidence against you or assist the Police investigation against you. We can advise you about what should be said during a Police interview. You may want to know – should I make a statement to Police? Should I attend a Police interview? Do I need to give my DNA? Will the Police leave me alone if I explain my side of the story? Will I be remanded?

Our lawyers can also attend the Police station with you if you feel more comfortable having someone on your side to assist you through the interview process.

We are defence lawyers who specialise in defending charges of Intentionally Cause Serious Injury and we can devise a case strategy for you.

The answer to these questions can lead to a charge of Intentionally Cause Serious Injury being withdrawn before the trial or an acquittal.

Preparing a case strategy early will increase the chances of preserving valuable pieces of evidence which can help your case later on. It may lead to witnesses that we will take statements from rather than the Police. 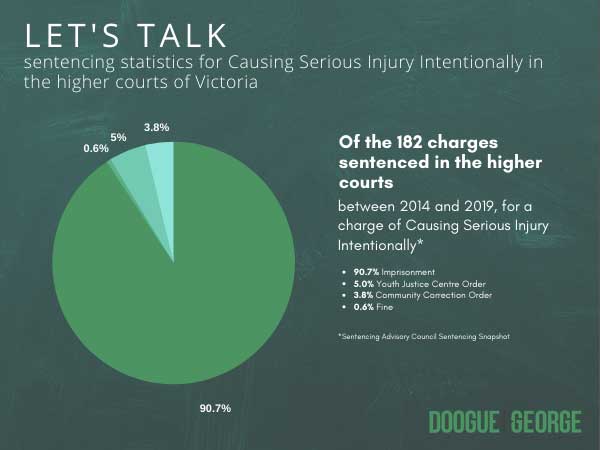 A matter relating to or involving this charge will likely be heard in the County Court.

The elements of the offence

Intentionally causing serious injury, as created by s 16 of the Crimes Act 1958 (Vic) (“the Act”), has the following four elements:

The prosecution must establish each of these four elements beyond a reasonable doubt for an accused to be convicted.

Serious injury after 1 July 2013
For offences committed after 1 July 2013, ‘injury’ means physical injury or harm to mental health, whether temporary or permanent and ‘serious injury’ means an injury (including the cumulative effect of more than one injury) that endangers life or is substantial and protracted.2 ‘Serious injury’ also means the destruction, other than in the course of a medical procedure, of the foetus of a pregnant woman, whether or not the woman suffers any other harm.3

‘Physical injury’ includes unconsciousness, disfigurement, substantial pain, infection with a disease and an impairment of bodily function.4 ‘Harm to mental health’ includes psychological harm but does not include an emotional reaction such as distress, grief, fear or anger unless it results in psychological harm.5

The new definition of ‘serious injury’ now means that when a jury has determined that an injury endangers life, is substantial and protracted, or involves the destruction of a foetus, there is no separate judgment made about whether the injury is a ‘serious injury’ as had been the case previously.

Assessing injury
The complainant’s age, gender and state of health may all be relevant when assessing whether the injury is serious. An injury that is inflicted on a frail person may be more serious than the same injury inflicted on a person in good health.7 A serious injury may also result from a combination of injuries.

Element 4: The accused acted without lawful justification or excuse
The prosecution must disprove any defences which are open on the evidence.12

Self-defence
People can use reasonable force to defend themselves from unlawful violence, as long as they believe on reasonable grounds that what they are doing is necessary in self-defence.13 There are two elements to establishing self-defence:

Once self-defence is raised by an accused, the onus is on the prosecution to disprove at least one of these two elements beyond reasonable doubt or the accused should be acquitted.14

Automatism
Automatism refers to acts that are committed without volition. It requires the total absence of control and direction by an accused. Impaired, reduced or partial control is not sufficient. The key issue is lack of the exercise of will.15 Automatism may result from a number of ‘diseases of the mind including schizophrenia, being in a dissociative state, and epilepsy.

Duress
An act is committed under duress if it is committed due to a threat of physical harm if the act is not done.16 To have acted under duress, an accused must have been so constrained that he or she became a mere innocent of the crime.17Duress is a complete defence.18

Aside from self-defence, automatism, duress and mental impairment, a number of offence-specific defences negating specific elements of the offence can apply. As has been discussed, the prosecution must establish of the four elements of the offence beyond a reasonable doubt and an accused must be found not guilty if the prosecution is unable to do so. Offence-specific defences may include:

The injury suffered by the complainant is not a serious injury
This would negate the first element of the offence but may result in a guilty verdict for the alternative less serious charge of intentionally causing injury.

For example, a defence could be that another act or event occurred between the time of the accused’s act and the time the complainant suffered a serious injury. In such a case, an accused remains will only be liable if his or her conduct is a substantial operating cause of the serious injury when it occurs.

Difficulties in causation may also arise if there is evidence that the victim’s own actions were a cause of the serious injury. For example, if the victim injured him or herself while attempting to get away from the accused. The accused’s actions will only be considered to be a legal cause of the result if the victim’s acts were a ‘natural consequence’ of those actions.19

However, the mere fact that the accused acted differently than he or she would have behaved when sober does not enliven this defence and a drunken intent will still satisfy this element of the offence.

In a trial for an alleged offence occurring after 1 July 2013, the judge will ask the jury:

Maximum penalty for section 16 of the Crimes Act 1958

Intentionally Causing Serious Injury (s16 of the Crimes Act 1958) has a maximum penalty of 20 years imprisonment.

Case examples – results from our firm