Home » ASIC Offences » Good faith, use of position and use of information

Good faith, use of position and use of information

The offence of Good Faith, Use of Position and Use of Information is found in section 184 of the Corporations Act 2001. It is a criminal offence for a person who, as a director of a company, was reckless or dishonest in the performance of their duties.

This offence may also be committed by employees who used their position dishonestly or recklessly in order to gain advantage for themselves or for someone else, or in order to cause detriment to the company. Further, an employee or ex-employee who used information dishonestly with the same intention is also deemed as having committed this offence. 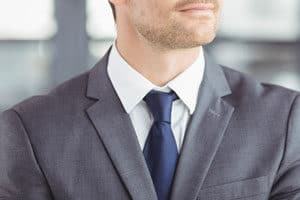 Have you been accused of Good Faith, Use of Position and Use of Information? Call us to arrange a conference with one of our skilled lawyers where you can ask your important questions.

Have you been asked by an investigator to come in for questioning in relation to allegations of being reckless or dishonest in the performance of your Corporate duties? The investigator will either telephone you to make an appointment.

Before the interview is started, you will be given an opportunity to speak to a lawyer. Even if you think you do not need to or if you think it will make you look guilty, speaking to a lawyer is the best thing you can do for yourself.

Our lawyers have experience in attending interviews. We know what the investigators are likely to say and do and we know what your rights and obligations are. We can provide you with detailed advice on the interview process and step you through your options for responding to the investigator’s questions. Do not go blindly into an interview. For a charge of this kind, it is likely the investigator already has documents or material as well as statements from people that they will say supports a charge against you. It is vital that you are prepared.

If you have been charged with offences relating to Good Faith, Use of Position and Use of Information in Corprorate Duties, you must obtain advice from a lawyer about defending the allegation. The investigator will compile a brief containing evidence they say proves the charge against you. At Doogue + George Defence Lawyers, we are experienced in Corporate criminal allegations. We take the time to carefully consider the brief of evidence and provide you with comprehensive legal advice on your best strategy for defending the charge against you.

Before making the decision to plead guilty to a charge of this kind, it is essential that you get advice from a lawyer. At Doogue + George Defence Lawyers, we will review the evidence against you and ensure that the charge of Good Faith, Use of Position and Use of Information is the appropriate charge and that the summary of facts reflects what you say really happened.

Then we will assist you to prepare for your plea hearing by obtaining character references and take detailed instructions from you about your personal history and the circumstances that lead to the offending. We will prepare a plea to present to the Court to ensure you receive the lowest possible penalty available to you. 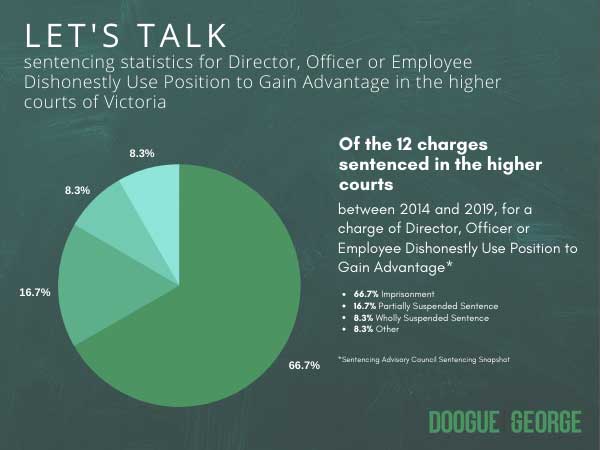 This charge may be heard in either the Magistrates’ Court or the County Court.

Examples of Good Faith, Use of Position and Use of Information

The elements of each offence

In order for an accused to be proven guilty of an offence listed in section 184, the following elements must be established in court beyond a reasonable doubt:

For Good Faith – Directors and Other Officers – s 184(1)
ICAC has stated that ‘this section effectively provides criminal sanctions for a contravention of the statutory obligation imposed on directors and officers of a corporation by s 181 of the Corporations Act.’2

For Use of Position – Directors, Other Officers and Employees – s 184(2)


For Use of Information – Directors, Other Officers and Employees – s 184(3)

Case example of 184(3): In Castrisious v McManus [1991] 9 ACLC 287, the director of a company became aware that it was about to be liquidated. In seeking to protect himself and some fellow associates, the director diverted funds belonging to the company to discharge debts owed by himself and the fellow associates. These debts had been incurred so that the borrowed money could be on-lent to the company. This action by the director was to the detriment of creditors of the company and as a consequence, he was convicted of making improper use of information acquired as a director under s 184(3).3

Dishonesty will be interpreted as ‘dishonest according to the standards of ordinary people’.4

The Corporations Act was amended recently to clarify that it is not a defence if the person uses their position (184(2)) or information (184(3)) with the result or intention of gaining an advantage for the corporation itself.5

Maximum penalty for section 184 of the Corporations Act 2001

The maximum penalty for the offence of breaching Good Faith, Use of Position and Use of information (s184 of the Corporations Act 2001) is 15 years imprisonment.6 The maximum penalty was recently increased following the Financial Services Royal Commission’s final report. Please keep in mind that the maximum penalty is reserved for cases involving the most serious forms of offending.