Fail to Store Category A or B Longarm Correctly

The offence of Fail to Store Category A or B Longarm Correctly is found in section 121(1) of the Firearms Act 1996. It is a criminal offence that is committed by a person who is found to have not properly stored a category A and B longarms.

Have you been accused of Fail to Store Category A or B Longarm Correctly? You will normally become aware of this allegation when police conduct their random inspection of your firearms or if they execute a search warrant at your home because someone has made a complaint about how your firearms are stored. You should take the opportunity to call one of our lawyers as soon as you become aware the police are concerned with how you are storing your firearms. 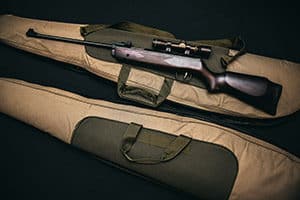 The police only interview people they suspect of committing an offence. Therefore, it is worth getting legal advice before agreeing to participate in an interview. The police interview is not your opportunity to explain your version and hope the police will stop their investigation. The police will normally have gathered evidence they want to rely on to support the allegations before they interview, but they will not show this to you until you answer their questions.

It is also worth knowing that anything you tell police can appear in a brief of evidence against you. There is no such things as an “off the record” chat. They will use anything they think is useful against you in court.

You may decide to plead not guilty to a charge of Failing to Store Category A or B Longarm Correctly because the police have made a mistake in their assessment. If this is the case, one of our experienced defence lawyers can defend you in court. You want someone on your side who is going to carefully listen to your instructions and proactively protect your interests in court.

If the police have a strong case against you, it may be in your best interests to resolve your matter to get the full benefit of resolving your case early.

One of our lawyers can represent you at court on a plea of guilty. Your lawyer will advise you of the consequences of pleading guilty. For example, the Licence and Regulation Division may cancel your firearms licence.

Your lawyer will appear in court and present your personal circumstances to the Magistrate with the aim of mitigating your penalty. Your lawyer will also explain your reason for Failing to Store your Category A or B Longarm correctly. 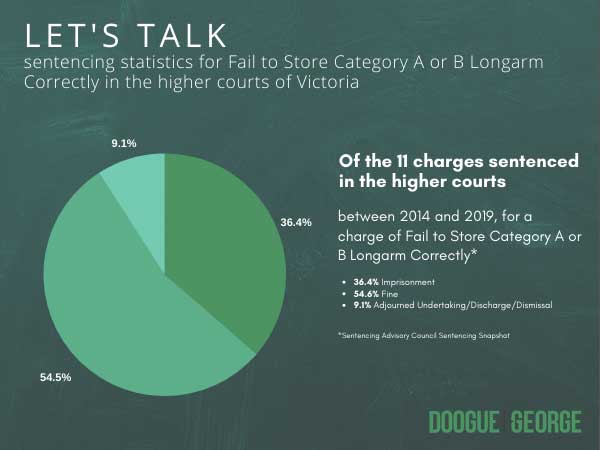 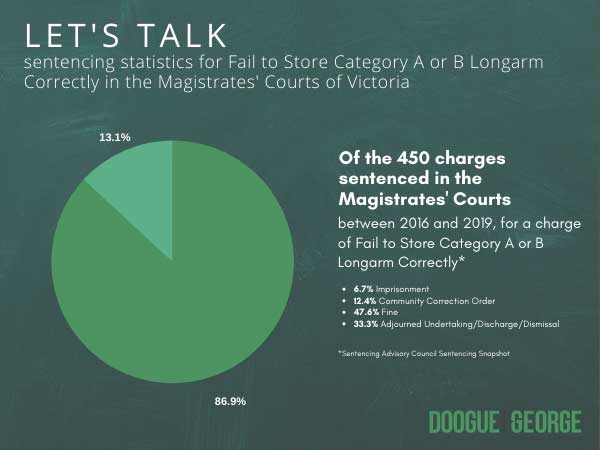 The prosecution must prove the following two elements:

Examples of Fail to Store Category A or B Longarm Correctly

The legislation for this offence can be found on section 121(1) of the Firearms Act 1996.

Criminal defences that are available are honest and reasonable mistake of belief, necessity, sudden or extraordinary emergency and incorrect factual matrix. We defended one on the basis that the Police were making an incorrect assessment of the weight which resulted in a withdrawal of charges.

The decision on whether to plead guilty or not guilty to this charge can best be made only after a careful analysis of the facts of your case. Contact a criminal lawyer to assess the merits of your case.

The offence of Fail to Store Category A or B Longarm Correctly (s121(1) of the Firearms Act 1996) carries a fine of 60 penalty units (around $9,500) or 12 months imprisonment as the highest possible sentence.