The law relating to the offence of Intentionally Cause Injury is in section 18 of the Crimes Act 1958 Victoria. This charge means you have deliberately caused another an injury.

Have you been accused of Intentionally cause Injury? You should get some legal advice from one of our experienced lawyers as soon as you become aware of this allegation.

Before you attend a Police station to participate in an interview, you should arrange a conference with one of our lawyers. Our lawyers can advise you about what should be said during a Police interview. You may want to know – should I make a statement to Police? Should I attend a Police interview? Do I need to give my DNA? Will the Police leave me alone if I explain my side of the story? Will I be remanded?

You must understand that anything you tell the Police without legal advice might make running a defence in Court more difficult later on. Also, Police often only interview you to get information from you hurts your defence.

Our lawyers can also attend the Police station with you if you feel more comfortable having someone there with you.

We are defence lawyers who specialise in defending charges of Intentionally cause Injury. Make a time to speak with one of lawyers who can devise a case strategy for you.

In a case like this, you want a lawyer who is going to consider – Is there relevant CCTV footage? Is self-defence an option? Have the Police done a compete investigation? Are there people who the Police have not spoken to who can shed some light on this case? Is there evidence which shows you did not commit this crime?

By doing the necessary groundwork, it may lead to a charge of Intentionally Cause Injury being withdrawn by Police early or an acquittal.

Our lawyers are experienced in representing people charged with Intentionally Cause Injury. We take the time to explain the implications of pleading guilty, the possible outcomes and what material should be gathered to get the best possible outcome for our clients. 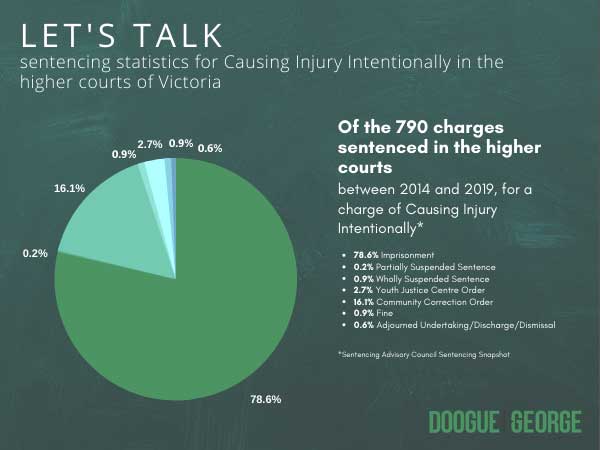 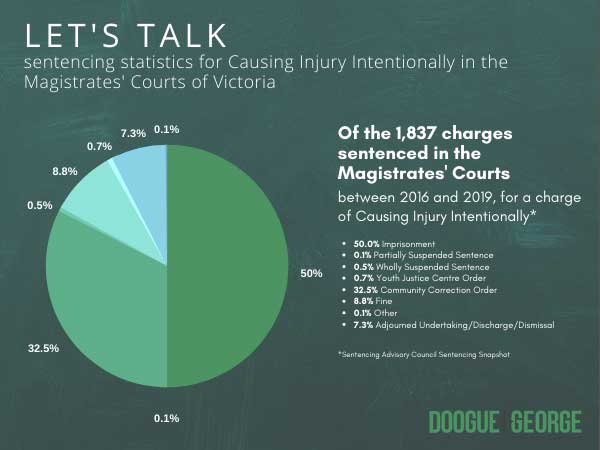 Intentionally cause injury is an indictable offence, which means that it may be heard in the higher courts; however it can also be tried summarily in the Magistrates’ Court. The seriousness of the circumstances surrounding the charge will determine where the matter is heard.

The statutory provisions of Intentionally Cause Injury

Pursuant to s 18 of the Crimes Act 1958 (Vic) (“the Act”), an accused person commits the offence of intentionally causing injury if:

Intentionally Cause Injury: The elements

There are four elements that constitute the offence. The prosecution must prove each of them ‘beyond reasonable doubt’ to prove their case against the accused person. If the prosecution is unable to do this, the accused is not guilty of the offence. As criminal lawyers, if the case is not a plea of guilty, we investigate cases and identify problems in the prosecution case, to show that one or more of the elements are not proven.

The prosecution must prove that they suffered an injury.

In this context the word injury has a specific legal meaning. For any offence alleged to have been committed after 1 July 2013, injury is defined in s 15 of the Act as:

whether temporary or permanent;
…
“physical injury” includes unconsciousness, disfigurement, substantial pain, infection with a disease and an impairment of bodily function;

“harm to mental health” includes psychological harm but does not include an emotional reaction such as distress, grief, fear or anger unless it results in psychological harm;
Arguably injuries that are superficial or trifling are not injuries within the meaning of s 15. We can make this assessment and attempt to have charges withdrawn if we do not think that the complainant has suffered an injury as defined by the Act.

This element will be satisfied if the accused caused the injury directly, for example by hitting the complainant.

It will also be satisfied if the accused caused the injury indirectly.1

If an accused was heavily affected by alcohol or drugs at the time, that can affect whether they are treated by the law as able to form the necessary intention.

It is not a defence to the offence of Intentionally Cause Injury if the accused intended to cause a different injury to that which was ultimately caused. All that the prosecution must prove is that they intended to cause an injury.

Element 4: The accused acted without lawful justification or excuse.
The prosecution must disprove any defences the accused seeks to rely on.

A defence that often arises when someone is charged with intentionally cause injury is self-defence. The availability of a defence of self-defence can turn on whether the force used was reasonable and proportionate in all the circumstances. Other defences that may arise are factual dispute about wrongful identification, mental impairment or necessity.

In a trial, the questions a judge will ask the jury to consider are:2

Maximum penalty for section 18 of the Crimes Act 1958

In terms of the sentencing range available, the Act stipulates that the offence of Intentionally Cause Injury (s18 of the Crimes Act 1958) carries a 10-year term of imprisonment as the highest possible sentence. However the maximum term of imprisonment that can be imposed in the Magistrates’ Court for a single offence is two years. Further, the maximum aggregate total sentence that can be imposed is five years.3

This offence is a medium – high ranging violent offence which does not generally carry a goal term when guilt is established in the Magistrates’ Court if it is a first offence that is not particularly gruesome.

Check out some of the criminal cases we’ve defended in court that involve the offence of Intentionally Cause Injury:

< Back to Assault & Violence Offences